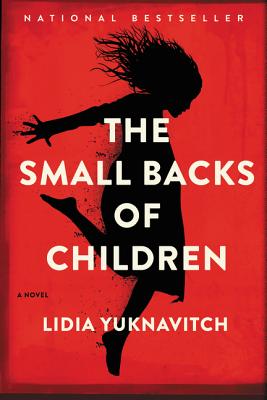 “I have never felt so wrung out by a novel and yet simultaneously invigorated…a terrifically good novel and powerfully written.”
— Paris Review

“This is a novel for the bold of heart.”
— New York Journal of Books

“An intensely corporal, potently feminist, tenaciously written work as alert to animal resilience as to the capacity for bruised and battered suffering, for desire, for ecstasy.”
— Boston Globe

Advance Praise for THE SMALL BACKS OF CHILDREN
“Yuknavitch is a gifted writer whose dizzying passages are often as compelling as they are grotesque.”
— Kirkus Reviews

“Lidia Yuknavitch burns through sex, art, and war in The Small Backs of Children.”
— Vanity Fair

“Lidia Yuknavitch’ s explosive new novel…is fierce in its vision, with captivating prose that carries its own momentum. Yuknavitch has created a reading experience that is uncomfortable and dazzling, with a vital intensity that grabs at the gutstrings.”
— Los Angeles Times

“The Small Backs of Children beautifully examines the fractures of loss and the myriad ways we can recover from it. ”
— Huffington Post

“Gorgeous, scary, and a breathtaking rush to read, this book is less a meditation than a provocation on the power and dangers of art.”
— Library Journal (starred review)

“Lidia Yuknavitch’s first novel for a big publisher is a big winner.”
— The Oregonian

“If you want a novel that is going to swallow you alive this summer, turn to Lidia Yuknavitch whose The Small Backs of Children is the kind of book that goes straight for your heart and your mind…This one is important.”
— Bustle Summer Reading Roundup

“The Small Backs of Children proves once again that Yuknavitch is witness to the kind of stories we ought to read.”
— The Rumpus.com

“[An example] of thrilling storytelling with universal appeal.”
— Entertainment Weekly

“Yuknavitch has a point of view and a fragmented and fractured visionary elegance in her poetic, allusive punk-infused voice. She grabs readers by the throats and immerses them in an intense, wrenching fictive world, but lets them up for air through careful structuring and pacing.”
— Buffalo News

“In the latest book from Lidia Yuknavitch, she delves into the aftermath of conflict and tragedy, showing how one image can impact the lives of numerous characters...”
— Vol 1Brooklyn

“Yuknavitch’s writing style works in absolutes and blanket statements like large swaths of color on a canvas…if you ask me to follow Yuknavitch’s plume into a raw, experimental work, I gladly will.”
— Portland Mercury

“The Small Backs of Children is deeply complex and layered, yet also deceptively simple…exquisite in its lyricism and its ability to articulate and amplify the experiences of suffering and survival.”
— The Nervous Breakdown

“Lidia Yuknavitch’s writing is a sizzle wire. Her fierce prose will jumpstart your heart and electrify your brain…and her new novel, The Small Backs of Children is a provocative and thrilling jolt of a book.”
— Bustle

“…this story packs a powerful punch. It may sound heavy but, trust us, everyone is going to be talking about this book.”
— Boats International