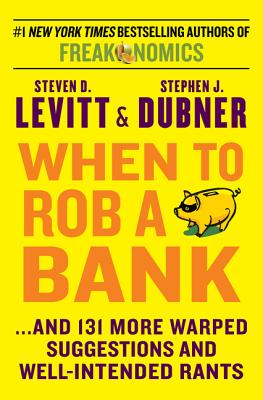 When to Rob a Bank

In celebration of the 10th anniversary of the landmark book Freakonomics comes this curated collection from the most readable economics blog in the universe. It’s the perfect solution for the millions of readers who love all things Freakonomics. Surprising and erudite, eloquent and witty, When to Rob a Bank demonstrates the brilliance that has made the Freakonomics guys an international sensation, with more than 7 million books sold in 40 languages, and 150 million downloads of their Freakonomics Radio podcast.

When Freakonomics was first published, the authors started a blog—and they’ve kept it up. The writing is more casual, more personal, even more outlandish than in their books. In When to Rob a Bank, they ask a host of typically off-center questions: Why don’t flight attendants get tipped? If you were a terrorist, how would you attack? And why does KFC always run out of fried chicken?

Over the past decade, Steven D. Levitt and Stephen J. Dubner have published more than 8,000 blog posts on the Freakonomics website. Many of them, they freely admit, were rubbish. But now they’ve gone through and picked the best of the best. You’ll discover what people lie about, and why; the best way to cut gun deaths; why it might be time for a sex tax; and, yes, when to rob a bank. (Short answer: never; the ROI is terrible.) You’ll also learn a great deal about Levitt and Dubner’s own quirks and passions, from gambling and golf to backgammon and the abolition of the penny.


Praise For When to Rob a Bank: ...And 131 More Warped Suggestions and Well-Intended Rants…

“[A] kooky and counterintuitive collection of economic analysis. ... Plenty to revel in.” — Kirkus Reviews

“Levitt and Dubner... return with more of their signature humor and economic perspective on everyday life. ... Will be a hit with fans of Freakonomics.” — Library Journal

Praise for the Freakonomics Books: “Genius... has you gasping in amazement.” — Wall Street Journal

“An afternoon with Levitt and Dubner’s book will transform you into the most interesting person in the room that evening.” — National Public Radio

“A splendid book, full of unlikely but arresting historical details that distinguish the authors from the run of pop social scientists.” — New York Times

“An addictive, irresistible crash course in the populist application of economics.” — The A.V. Club