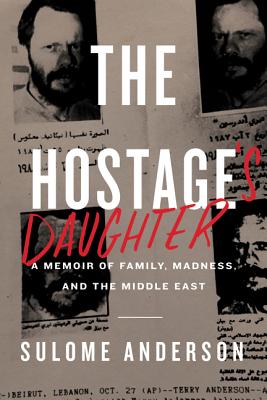 A Story of Family, Madness, and the Middle East

In this gripping blend of reportage, memoir, and analysis, a journalist and daughter of one of the world’s most famous hostages, Terry Anderson, takes an intimate look at her father’s captivity during the Lebanese Hostage Crisis and the ensuing political firestorm on both her family and the United States—as well as the far-reaching implications of those events on Middle Eastern politics today.

In 1991, six-year-old Sulome Anderson met her father, Terry, for the first time. While working as the Middle East bureau chief for the Associated Press covering the long and bloody civil war in Lebanon, Terry had been kidnapped in Beirut and held for her entire life by a Shiite Muslim militia associated with the Hezbollah movement.

As the nation celebrated, the media captured a smiling Anderson family joyously reunited. But the truth was far darker. Plagued by PTSD, Terry was a moody, aloof, and distant figure to the young daughter who had long dreamed of his return—and while she smiled for the cameras all the same, she absorbed his trauma as her own.

Years later, after long battles with drug abuse and mental illness, Sulome would travel to the Middle East as a reporter, seeking to understand her father, the men who had kidnapped him, and ultimately, herself. What she discovered was shocking—not just about Terry, but about the international political machinations that occurred during the years of his captivity.

The Hostage’s Daughter is an intimate look at the effect of the Lebanese Hostage Crisis on Anderson’s family, the United States, and the Middle East today. Sulome tells moving stories from her experiences as a reporter in the region and challenges our understanding of global politics, the forces that spawn terrorism and especially Lebanon, the beautiful, devastated, and vitally important country she came to love. Powerful and eye-opening The Hostage’s Daughter is essential reading for anyone interested in international relations, this violent, haunted region, and America's role in its fate.


Praise For The Hostage's Daughter: A Story of Family, Madness, and the Middle East…

“[A] heart-felt, moving . . . examination of a greatly changed Middle East and the groups that benefited from their hostage taking and other terrorist activities, but are far from atoning for them.” — Rod Nordland, international correspondent at large, The New York Times and author of The Lovers

“A gutsy coming-of-age memoir, beautifully written, and always provocative. From wounded adolescence to fearless investigative reporter, Sulome Anderson confronts her father’s kidnappers-and along the way, she shines a harsh light on the murky world of intelligence in a distraught Middle East. A poignant and astonishing mystery story.” — Kai Bird, Pulitzer Prize-winning historian and author of The Good Spy: The Life and Death of Robert Ames

A remarkable personal story as well as penetrating insight into the adamantine world of the Middle East, where truth and politics are irreconcilable. — Brian Keenan, former hostage and author of An Evil Cradling

“An excellent piece of reportage from someone who clearly has an intimate understanding of the Middle East, interwoven with an equally gripping and emotional account of one woman’s quest for reason and forgiveness. This is the story that few journalists have the bravery to write about others, let alone themselves.” — Reza Azlan, author of Zealot

[Sulome’s] brutally candid, fiercely intelligent, and beautifully crafted memoir is both a fascinating introduction to the shadow world of Middle East intrigue and an inspiring story of resilience and recovery.” — Stephen M. Walt, coauthor of The Israel Lobby and U.S. Foreign Policy

“There are times when you want to look away. This book is that personal. By telling the story of the author-and her famous family-it also traces the story of terrorism in the modern era, in gripping and intimate ways.” — Brian Williams, MSNBC

“A perilous and riveting spiral into Middle Eastern politics, exploring the dawn of the terrorist era in Beirut . . . Anderson creates a compelling depiction of the collateral damage of terrorism and a remarkable piece of investigative journalism with a surprise twist.” — Publishers Weekly

“Anderson is at her best when she teases apart the narrative’s many threads, which number not just Hezbollah, but also the broader community of Shiite Islam, to say nothing of Israeli intelligence, the CIA, Iran, and other actors in set pieces such as the Beirut embassy bombing.” — Kirkus

Sulome Anderson is a journalist based between Beirut, Lebanon, and New York City. Her work has appeared in New York magazine, Vice, The Atlantic, Foreign Policy, and Vox. She has covered subjects ranging from Syrian refugee child brides to an ISIS presence in Lebanon and has also worked in Egypt and Turkey, where she reported on anti-government protests. Her goal is to draw attention to individuals marked by conflict and remind her readers that these people, whether victims or villains, are as human as they are.