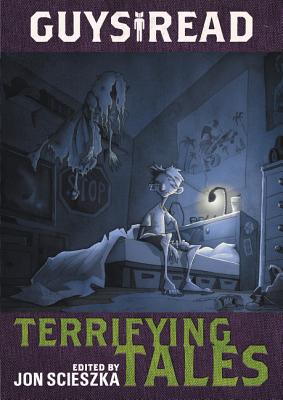 Be afraid, be very afraid of Terrifying Tales, the sixth volume in the Guys Read Library of Great Reading.

Eleven masters of suspense—Kelly Barnhill, Michael Buckley, Adam Gidwitz, Adele Griffin and Lisa Brown, Claire Legrand, Nikki Loftin, Daniel José Older, Dav Pilkey, R.L. Stine, and Rita Williams-Garcia—have come together to bring you a bone-chilling collection of original ghost stories with illustrations by Gris Grimly, perfect for sharing around the campfire, reading under the covers with a flashlight, and scaring your friends’ pants off.

Compiled and edited by kid-lit madman Jon Scieszka, Guys Read: Terrifying Tales is a creepy-fun read (if you’re brave enough, that is).

Claire Legrand is the New York Times bestselling author of Furyborn, the first book in the Empirium Trilogy. She is also the author of several other titles for children and teens, most notably The Cavendish Home for Boys and Girls, Winterspell, and the Edgar Award-nominated Some Kind of Happiness. Sawkill Girls is her seventh novel. Claire lives in central New Jersey, where she works as a librarian.