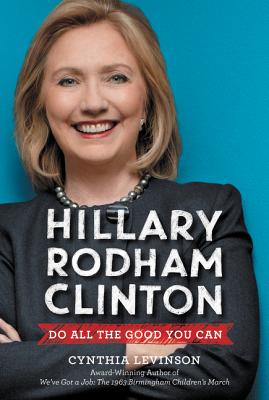 Do All the Good You Can

Hillary Rodham Clinton is a true leader. Growing up in Park Ridge, Illinois, Hillary was inspired by the philosophy of John Wesley, who urged his followers to "do all the good you can." Rising to prominence in 1992 as the First Lady of the United States, Hillary captured the world's attention with her bold ideas and political forcefulness.

From her time at Wellesley to her life at the White House and beyond, Hillary has been at the forefront of huge change—and despite setbacks and political scandals, she has worked for good in the world.

Acclaimed author Cynthia Levinson creates a compelling and personal portrait of Hillary's historic journey from her childhood to her service as secretary of state and beyond. Includes a timeline of Hillary Rodham Clinton's life and an eight-page photo insert.

"This extensively researched and comprehensive biography tells us more of the woman who is that public figure, from some of her inspirations (like Dr. Martin Luther King, Jr. and the Birmingham protests) and the impact of her religious faith on her commitment to service" (Brightly.com).


Praise For Hillary Rodham Clinton: Do All the Good You Can…

“A respectful, insightful, and inspiring portrait of a fiercely ambitious, remarkably successful woman who has changed the face of American politics.”
— Kirkus Reviews

“Readers will…come away with a sense of what makes Hillary run, even in the face of overwhelming odds.”
— Booklist

Cynthia Levinson is the award-winning author of We’ve Got a Job: The 1963 Birmingham Children’s March, which received four starred reviews and was one of Publishers Weekly’s Best Books of 2012, and Watch Out for Flying Kids!: How Two Circuses, Two Countries, and Nine Kids Confront Conflict and Build Community. Cynthia worked in education policy and divides her time between Texas and Massachusetts.