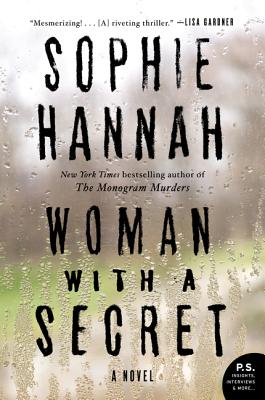 Woman with a Secret (Paperback)

The New York Times bestselling author of The Monogram Murders—in the ranks of Ruth Rendell, Deborah Crombie, Kimberly McCreight, and Tana French—makes her William Morrow debut with a dark and chilling psychological thriller in which a woman desperate to hide a devastating secret in her past is drawn into a murder investigation.

Traffic on Elmhirst Road has come to a halt. The police are stopping cars, searching for something. Nicki Clements waits patiently, until she glimpses a face she hoped she’d never see again. It’s him—and he’s the cop checking each car. Desperate to avoid him, she makes a panicky U-turn and escapes.

But Nicki’s peculiar behavior did not go unnoticed, and now the police have summoned her for questioning. A resident of Elmhirst Road has been murdered—a controversial newspaper columnist named Damon Blundy. The detectives begin peppering her with questions. Why was she seen fleeing the scene? What is her connection to the victim? Why was the knife that killed him used in such a peculiar way? Why were the words “HE IS NO LESS DEAD” painted on the wall of Blundy’s study—and what do they signify?

One simple answer could clear her. But she can’t explain why she fled Elmhirst Road that day without revealing the secret that could ruin her.

Nicki isn’t guilty of murder. But she’s far from innocent. . . .


Praise For Woman with a Secret: A Novel…

“Mesmerizing! Sophie Hannah puts the ‘psycho’ in psychological suspense with this riveting thriller involving the ultimate closed-door crime scene--and a narrator who is both more and less than what she seems.”
— Lisa Gardner, #1 New York Times-bestselling author of Crash and Burn and Fear Nothing

“No one writes twisted, suspenseful novels quite like Sophie Hannah. I just love her dry, edgy wit and the way she brings her weirdly wonderful characters to life. Woman With a Secret is unpredictable, unputdownable, and unlike anything you’ve read before.”
— Liane Moriarty, #1 New York Times bestselling author of Big Little Lies and The Husband's Secret

“Her plots are ingenious—she’s a writer in complete command of her material—and it’s O.K. if you haven’t quite kept up. She keeps you puzzled and intrigued, right until the end.”
— The New York Times Book Review

“Kept me guessing at every turn. Sophie Hannah...has clearly mastered the psychological methodology [of] Gillian Flynn or Tana French. Her unreliable narrator commands our attention and even our sympathy.”
— NPR

“Witty and suspenseful...moves with the speed and unpredictability of a pinball. The author portions out Nicki’s secrets in ways that both heighten tension and increase sympathy for this unusual protagonist.”
— The Wall Street Journal

Is Nicki a sympathetic character? Is it her own fault that she’s the way she is, or someone else’s? Or does the novel have an attitude to character and behaviour that goes beyond that sort of moral judgement?

Whose behaviour is more reprehensible: Nicki’s or Melissa’s? Why?

Who bears most responsibility for the murder of Damon Blundy? His killer, or another character in the book?

Is Nicki in control of the path her life is taking and able to make choices, or is she out of control?

Would you describe Nicki as a love/sex addict? Do you believe that’s a real condition, or psychobabble?

Does the novel see our ability to live some of our lives online – via chatrooms and social media – as freeing or oppressive? Do you agree?

What is the novel saying about online cruelty? Why does, for example, Bryn Gilligan, log onto Twitter and read and respond to people’s insulting comments all day long? Why do we care when strangers insult and abuse us online, given that we don’t know them and could ignore them?

Is Damon Blundy a goodie or a baddy, or is that question too morally simplistic?

What is the novel saying about hypocrisy?

At one point, in one of his columns, Damon Blundy writes, ‘If we want better apologies, we need to be more forgiving’. What might he have meant by this, and do you agree with

him? Ought we to condemn the sin and not the sinner, and is this what Blundy is advocating in his attitude to Bryn Gilligan?

In the UK, the novel is called The Telling Error – why do you think this title was chosen? What relevance does it have to the book?

Paula Riddiough, the former MP, has a very unusual attitude to marriage and fidelity – do you have any sympathy with it? Is Paula’s model of the ideal relationship more or less healthy than Nickis, or than Melissa’s?

What is the novel saying about secrets and lies? Are they the same thing? What’s the relationship between the two?

It is very important to Nicki to be able to tell Melissa the whole truth about her life. And yet, she’s demonstrably a committed liar. So why does it matter so much to her to tell the truth to this one person?

Can you understand why Nicki was so upset when her best friend and her brother became a couple?

Are Simon and Charlie right to be suspicious of Liv and Gibbs? What might really be going on there, assuming Liv and Gibbs haven’t broken up as they claim?