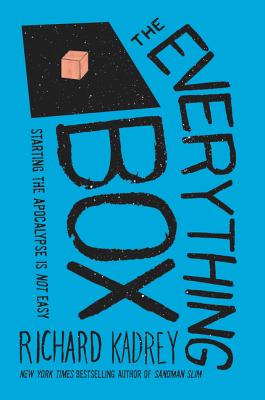 A Novel (Another Coop Heist #1)

Reminiscent of the edgy, offbeat humor of Chris Moore and Matt Ruff, the first entry in a whimsical, fast-paced supernatural series from the New York Times bestselling author of the Sandman Slim novels—a dark and humorous story involving a doomsday gizmo, a horde of baddies determined to possess its power, and a clever thief who must steal it back . . . again and again.

22000 B.C. A beautiful, ambitious angel stands on a mountaintop, surveying the world and its little inhabitants below. He smiles because soon, the last of humanity who survived the great flood will meet its end, too. And he should know. He’s going to play a big part in it. Our angel usually doesn’t get to do field work, and if he does well, he’s certain he’ll get a big promotion.

The angel reaches into his pocket for the instrument of humanity’s doom. Must be in the other pocket. Then he frantically begins to pat himself down. Dejected, he realizes he has lost the object. Looking over the Earth at all that could have been, the majestic angel utters a single word.

2015. A thief named Coop—a specialist in purloining magic objects—steals and delivers a small box to the mysterious client who engaged his services. Coop doesn’t know that his latest job could be the end of him—and the rest of the world. Suddenly he finds himself in the company of The Department of Peculiar Science, a fearsome enforcement agency that polices the odd and strange. The box isn’t just a supernatural heirloom with quaint powers, they tell him.

And suddenly, everyone is out to get it.


Praise For The Everything Box: A Novel (Another Coop Heist #1)…

“Richard Kadrey’s The Everything Box is a manic and hilarious Venn diagram of Elmore Leonard, Dave Barry, and the Book of Revelations. The last time the end of the world in a novel was this funny, aliens destroyed Earth to build a hyperspace bypass through it.” — Matt Wallace, author of Envy of Angels and Lustlocked on THE EVERYTHING BOX

“This book has everything I need in a book, and some things I didn’t know I needed. I couldn’t stop laughing at the freelance poltergeists, inept angels, doomsday devices, mooning werewolves (...mooning werewolf. I just got that), and small time career criminals in way over their heads. Highly recommended.” — Mur Lafferty, author of The Shambling Guide to New York on THE EVERYTHING BOX

“The story is fast paced, very funny, and exceptionally clever. Kudos to this author!” — Suspense Magazine on THE EVERYTHING BOX

“A supernatural comic caper that reads like one of the late Donald Westlake’s Dortmunder novels sprinkled with some fairy dust.” — Kirkus Reviews on THE EVERYTHING BOX

“Kadrey’s plot doesn’t depend on magic; instead, magic is the broth bringing all manner of delicious ingredients together in this wonderful stew of a story. This unusual urban fantasy is a delight.” — Publishers Weekly on THE EVERYTHING BOX

“A rolling bouncy-house of a caper tale, The Everything Box abounds with quick-witted characters, snarky dialogue, and surreal analogies. If you haven’t sampled Richard Kadrey’s take on fantasy yet, this is a great place to start.” — Christopher Moore, New York Times bestselling author of Lamb, A Dirty Job, and The Serpent of Venice on THE EVERYTHING BOX

“Fans of the Sandman Slim novels as well as newcomers wo the author will be thrilled by this fast-paced, smart-mouthed adventure.” — B&N Sci-Fi & Fantasy Blog on THE EVERYTHING BOX

“[Kadrey] can make Hell funnier than you’d believe. Raymond Chandler meets Good Omens, in which multiple doomsday cults, secret government agencies, and crooks of every description compete to retrieve the box, a perfect McGuffin, a Maltese Falcon with the power to destroy all of Creation.” — Cory Doctorow, BoingBoing on THE EVERYTHING BOX

“Kadrey’s simultaneously glib and snide voice [peppers] his story with delightful turns of phrase...The Everything Box is a fun read for all of the Kadrey-isms alone.” — Locus Magazine on THE EVERYTHING BOX

“His books are a romp... and they go down like cold lager on a hot afternoon. He’ll hit you with the heavy stuff... but he’ll give it to you in the first couple pages, cover it in stripper glitter, and have someone get socked in the nose.” — NPR Books on THE EVERYTHING BOX

“Hilarious, exciting, poignant, romantic, horrifying, and absurd in the very best way . . .” — New York Journal of Books on THE EVERYTHING BOX

“Richard Kadrey’s work has often possessed a dark, satirical edge, but in “The Everything Box,” the San Francisco author allows himself to venture far into the realm of the outright silly…reminiscent of the comic novels of Christopher Moore, Neil Gaiman or Terry Pratchett” — San Francisco Chronicle on THE EVERYTHING BOX

“Mr. Kadrey’s invention never flags. He always has another joke up his sleeve. Even if the joke is on us and our ability to drag the Heavenly Hosts themselves down to street level, and then corrupt them.” — Wall Street Journal on THE EVERYTHING BOX