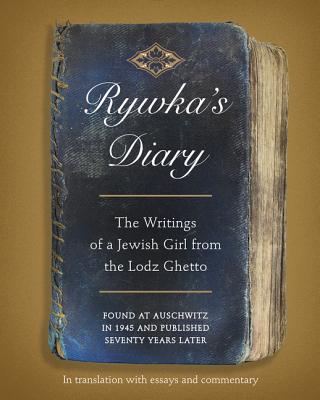 The Writings of a Jewish Girl from the Lodz Ghetto

The newly discovered diary of a Polish teenager in the Lodz ghetto during World War II—originally published by Jewish Family & Children’s Services of San Francisco, now available in a revised, illustrated, and beautifully designed trade edition.

After more than seventy years in obscurity, the diary of a teenage girl during the Holocaust has been revealed for the first time. Rywka’s Diary is at once an astonishing historical document and a moving tribute to the many ordinary people whose lives were forever altered by the Holocaust. At its heart, it is the diary of a girl named Rywka Lipszyc who detailed the brutal conditions that Jews in the Lodz ghetto, the second largest in Poland, endured under the Nazis: poverty, hunger and malnutrition, religious oppression, and, in Rywka’s case, the death of her parents and siblings. Handwritten in a school notebook between October 1943 and April 1944, the diary ends literally in mid-sentence. What became of Rywka is a mystery. A Red Army doctor found her notebook in Auschwitz after its liberation in 1945 and took it back with her to the Soviet Union.

Rywka’s Diary is also a moving coming-of-age story, in which a young woman expresses her curiosity about the world and her place in it and reflects on her relationship with God—a remarkable affirmation of her commitment to Judaism and her faith in humanity. Interwoven into this carefully translated diary are photographs, news clippings, maps, and commentary from Holocaust scholars and the girl’s surviving relatives, which provide an in-depth picture of both the conditions of Rywka's life and the mysterious end to her diary.

Moving and illuminating, told by a brave young girl whose strong and charismatic voice speaks for millions, Rywka’s Diary is an extraordinary addition to the history of the Holocaust and World War II.


Praise For Rywka's Diary: The Writings of a Jewish Girl from the Lodz Ghetto…

“[Rywka's Diary]—a work of elegant translation and painstaking contextualization by Holocaust scholars and surviving family members that sharpens the historical and spiritual lens through which it's absorbed—puts breath to a nearly lost voice.”
— Chicago Tribune

“More than just anoth­er obscure Holo­caust doc­u­ment, due to both its sear­ing emo­tion­al­i­ty and the ease with which one can iden­ti­fy with the coura­geous Rywka, the book details life in the Lodz ghet­to, the sec­ond largest ghet­to in Poland, from the per­spec­tive of a young woman com­ing of age.”
— Jewish Book Council

“During the dark days of the Holocaust, a bright 14-year-old girl of the Lodz ghetto committed her deepest feelings to a diary. . . . It is well-known that many diaries were written during the Holocaust. Most, like their authors, were lost. Only a few, like Lipszyc’s, survived. Her ultimate fate may be unknown, but her journal of torment is a testament to the survival of the human spirit in the face of evil.”
— Kirkus Reviews

Dr. Anita Friedman leads Jewish Family and Children's Services (JFCS) of the San Francisco Bay Area, one of the largest and oldest family service institutions in the United States. She oversees the JFCS Holocaust Center, which is dedicated to remembrance, research, and education about the Holocaust.

Dr. Anita Friedman leads Jewish Family and Children's Services (JFCS) of the San Francisco Bay Area, one of the largest and oldest family service institutions in the United States. She oversees the JFCS Holocaust Center, which is dedicated to remembrance, research, and education about the Holocaust.