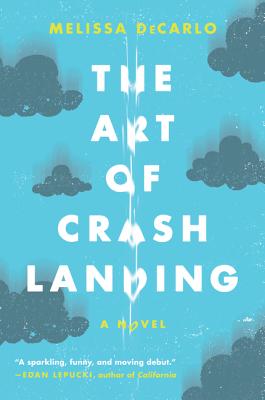 The Art of Crash Landing

From a bright new talent comes this debut novel about a young woman who travels for the first time to her mother’s hometown, and gets sucked into the mystery that changed her family forever

Mattie Wallace has really screwed up this time. Broke and knocked up, she’s got all her worldly possessions crammed into six giant trash bags, and nowhere to go. Try as she might, Mattie can no longer deny that she really is turning into her mother, a broken alcoholic who never met a bad choice she didn’t make.

When Mattie gets news of a possible inheritance left by a grandmother she’s never met, she jumps at this one last chance to turn things around. Leaving the Florida Panhandle, she drives eight hundred miles to her mother’s birthplace—the tiny town of Gandy, Oklahoma. There, she soon learns that her mother remains a local mystery—a happy, talented teenager who inexplicably skipped town thirty-five years ago with nothing but the clothes on her back. But the girl they describe bears little resemblance to the damaged woman Mattie knew, and before long it becomes clear that something terrible happened to her mother, and it happened here. The harder Mattie digs for answers, the more obstacles she encounters. Giving up, however, isn’t an option. Uncovering what started her mother’s downward spiral might be the only way to stop her own.

Hilarious, gripping, and unexpectedly wise, The Art of Crash Landing is a poignant novel from an assured new voice.


Praise For The Art of Crash Landing: A Novel…

“Stunning...DeCarlo has loudly claimed her seat at the table of today’s elite contemporary Southern women writers including Joshilyn Jackson, Fannie Flagg and Sue Monk Kidd. They continue the work of literary giants like Carson McCullers, Eudora Welty and Flannery O’Connor, crafting haunting stories about the peculiar, the impolite...” — Oklahoma Gazette

“[A] pitch-perfect novel about family secrets, self-forgiveness and redemption…DeCarlo’s debut novel’s originality and fresh voice will endear her to readers…Every character in DeCarlo’s novel is complex and richly drawn…this story is so vibrant and universally human that it’s sad to see it end.” — Dallas Morning News

“DeCarlo has created a compulsively likable mess of a protagonist who will keep readers laughing and cringing — even as they begin really rooting for her...surprising, poignant and page-turning...a strong debut and a thoroughly entertaining read.” — Fort Worth Star-Telegram

“This first novel by an Oklahoma-born Texan is written with verve, assurance and some salty language.” — Toronto Star

“THE ART OF CRASH LANDING is full of heart and sass. It’s about forgiveness, self-understanding, and the complicated love between mothers and daughters. Readers will root for DeCarlo’s goofy, sharp-tongued heroine.... This is a sparkling, funny, and moving debut.” — Edan Lepucki, author of CALIFORNIA

“I especially enjoyed the small-town feel of this novel, getting to know the Grandy residents, like the librarian, her snarky niece and the wheelchair-bound lawyer who help (and hinder) Mattie in her quest. The humor and humanity shine through in this delightful debut.” — Auburn Citizen

“Grief, laughter, sarcasm, heartache, sadness—Melissa DeCarlo’s debut novel has it all. Starting out with light-hearted humor thanks to the narration of its spunky protagonist, THE ART OF CRASH LANDING evolves into a compelling, genuine story about a woman’s search for her identity.” — BookPage.com

“A success...Mattie made me laugh with some of her sarcastic remarks and her self-deprecating humor.” — Oklahoman

“In this tender story of self-discovery and forgiveness, Mattie uneraths secrets about the alcoholic mom she realizes she never really knew.” — Good Housekeeping, Best New Reads

“I fell in love with Mattie, with all her sass, her snark, her bad ass ways. The best compliment I can give this talented new author? I wish I had written this novel. You nailed it, Melissa DeCarlo. And you deserve legions of very happy readers.” — Ellen Sussman, author of A WEDDING IN PROVENCE and FRENCH LESSONS

“Mattie describes herself as a natural disaster, and she may on to something…Melissa DeCarlo’s storytelling is strong and sure, genuinely moving and genuinely funny. Like her unlikely heroine, she’s a force to be reckoned with.” — Jacquelyn Mitchard, author of THE DEEP END OF THE OCEAN

“Behind the smartass mouth of Mattie Wallace, our troubled protagonist, is a whole lot of heart, soul and humor…You won’t stop reading THE ART OF CRASH LANDING until all the great mysteries of Mattie’s messed-up life have been unravelled by the ever-wise Mattie herself.” — Jessica Anya Blau, author of THE WONDER BREAD SUMMER

“A dazzling debut that truly soars, about figuring out the tug of the past, about family mysteries and the marvels of forgiveness, and all of it features a spunky heroine readers won’t be able to stop falling in love with.” — Caroline Leavitt, New York Times bestselling author of IS THIS TOMORROW and PICTURES OF YOU

“Mattie’s voice is fresh, her penchant for off-color language balanced with a revealing earnestness and vulnerability. Gandy’s other residents are vibrant and well-developed…DeCarlo’s debut is confident and accomplished, filled with heart and humor.” — Kirkus

“DeCarlo manages to make her heroine endearing despite her many flaws: she creates clever private jokes with the reader and slips in the occasional heartbreaking memory between brash shows of pushiness...DeCarlo’s writing bristles with Mattie’s vibrant personality...a triumphant first novel.” — Publishers Weekly

“DeCarlo deftly weaves in flashbacks about Mattie’s childhood and creates a cast of wonderfully full-blooded, fallible characters…Best of all is Mattie herself, who has cultivated a measure of humanity in addition to impressive survival skills and whose briskly told story is instantly involving. An impressive debut.” — Booklist

“DeCarlo bursts on the scene with a fascinating, mysterious novel…This debut is thick with secrets; it will cause readers to question everyone and everything. The author does an outstanding job combining suspense with heartache, adding a dash of romance and, at the end, hope.” — Library Journal

“I love books that give you so much more than you expect. Melissa DeCarlo has talent in abundance, and knows how to tell a story. THE ART OF CRASH LANDING is moving, funny, and compelling. You can’t ask for much more than that when you pick up a book.” — Its Either Sadness or Euphoria blog

“A dazzling read, one that will lift your spirits and let them soar...a story about place, family, and the perseverance of the self, DeCarlo digs deep into what makes a person a person, and reminds all of us that what we come from matters.” — Hello Giggles.com, 15 New Books You Absolutely Need to Read in September

“A satisfying first novel from Ms. DeCarlo, I’m looking forward to more from her.” — Books and Bindings

“Mesmerizing story of how the past affects the present but also reaffirms history is not the future. A very likeable flawed heroine.” — Heroes and Heartbreakers.com, "Women’s Fiction Best Bets for September 2015"

“Plucky, bold and authentic, and I defy anyone not to fall in love with this story.” — Daily Mail (London)

Melissa DeCarlo was born and raised in Oklahoma City, and has worked as an artist, graphic designer, grant writer, and even (back when computers were the size of refrigerators) a computer programmer. The Art of Crash Landing is her first novel. Melissa now lives in East Texas with her husband and a motley crew of rescue animals.

long history of making bad decisions. Do any of the other

How have those choices shaped present circumstances?

Even though Queeg was only Mattie’s stepfather for

from your past that you’re surprised you’ve maintained? Some you’re

girl reminds Mattie of herself as a teenager. If you could meet your

teenaged self, what advice would you give?

Genie. Why do you think the dynamic between them changes when

Genie goes off to college? How does that reflect the evolution of

As she investigates her mother’s history, Mattie’s own past and her

relationship with her mother are revealed one piece at a time. As you

progressed through the book, how did your feelings toward Mattie

change? What about your feelings toward her mother?

and seagulls, and a small town in Oklahoma with its wind and storms.

Do you think the settings were important to the story? Why or why not?

to Mattie? Do you have anything you’ve held onto longer than you

should because of the memories tied to it? What would it take for you

recurring theme in this novel. What are some of the characters whose

stories reflect this theme, and how did they deal with (or not deal

with) their guilt? How common is it for people to harbor guilt that

If you could check back in with Mattie a year after the book’s ending,

answers to those two questions the same or different?