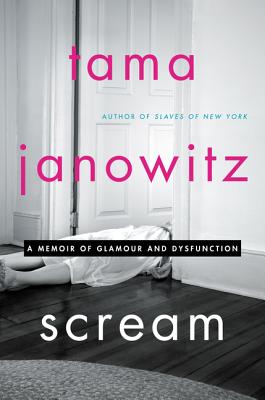 A Memoir of Glamour and Dysfunction

In this darkly funny, surprising memoir, the original “Lit Girl” and author of the era-defining Slaves of New York considers her life in and outside of New York City, from the heyday of the 1980s to her life today in a tiny upstate town that proves that fact is always stranger than fiction.

With the publication of her acclaimed short story collection Slaves of New York, Tama Janowitz was crowned the Lit Girl of New York. Celebrated in rarified literary and social circles, she was hailed, alongside Mark Lindquist, Bret Easton Ellis, and Jay McInerney, as one of the original “Brat Pack” writers—a wave of young minimalist authors whose wry, urbane sensibility captured the zeitgeist of the time, propelling them to the forefront of American culture.

In Scream, her first memoir, Janowitz recalls the quirky literary world of young downtown New York in the go-go 1980s and reflects on her life today far away from the city indelible to her work. As in Slaves of New York and A Certain Age, Janowitz turns a critical eye towards life, this time her own, recounting the vagaries of fame and fortune as a writer devoted to her art. Here, too, is Tama as daughter, wife, and mother, wrestling with aging, loss, and angst, both adolescent (her daughter) and middle aged (her own) as she cares for a mother plagued by dementia, battles a brother who questions her choices, and endures the criticism of a surly teenager.

Filled with a very real, very personal cast of characters, Scream is an intimate, scorching memoir rife with the humor, insight, and experience of a writer with a surgeon’s eye for detail, and a skill for cutting straight to the strangest parts of life.

Tama Janowitz has published eleven books, which have been translated into twenty-two languages and made into several films. She lives in upstate New York with her dog, Zizou Zidane, now that the other seven have expired, and her quarter horse mare, Fox, with whom she studies under Stasia Newell.

Praise For Scream: A Memoir of Glamour and Dysfunction…

“Janowitz’s greatest strength has always been her bluntness, and there’s certainly no lack of it in Scream.”
— The Guardian

“Although her life has been unique, there are universal elements, which she writes about with honesty and humor.”
— Bustle

“[This time] Tama turns the criticism on herself and offers insight, humor and detail in a way that’s not afraid to touch on the strange parts of life.”
— Buzzfeed

“...grim, and hilarious, Janowitz’s primal scream exposes...the highs and lows of her writing life, and the boons and traumas of fame and love.”
— Booklist

“...Scream, a sharp memoir that follows her life from ‘80s excess to a calmer, though no less astutely observed, present day.”
— Town & Country

“...first-rate memoir that cuts with razor-sharp insight through the truth about living life after youth.”
— DuJour