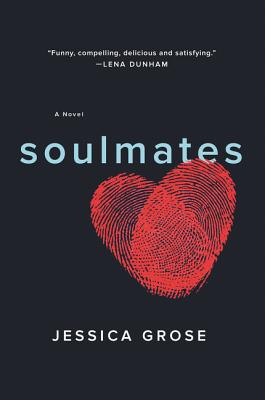 "For anyone who has ever suspected something sinister lurking behind the craze of new-age spirituality, Jessica Grose has crafted just the tale for you. With the delicious bite of satire and the page-turning satisfaction of a thriller, Soulmates is a deeply compelling, funny and sharply observed look at just how far we will go to achieve inner peace."—Lena Dunham

A clever, timely novel about a marriage, and infidelity, the meaning of true spirituality, perception and reality from the author of Sad Desk Salad, in which a scorned ex-wife tries to puzzle out the pieces of her husband’s mysterious death at a yoga retreat and their life together.

It’s been two years since the divorce, and Dana has moved on. She’s killing it at her law firm, she’s never looked better, thanks to all those healthy meals she cooks, and she’s thrown away Ethan’s ratty old plaid recliner. She hardly thinks about her husband—ex-husband—anymore, or about how the man she’d known since college ran away to the Southwest with a yoga instructor, spouting spiritual claptrap that Dana still can’t comprehend.

But when she sees Ethan’s picture splashed across the front page of the New York Post—"Nama-Slay: Yoga Couple Found Dead in New Mexico Cave"—Dana discovers she hasn’t fully let go of Ethan or the past. The article implies that it was a murder-suicide, and Ethan’s to blame. How could the man she once loved so deeply be a killer? Restless to find answers that might help her finally to let go, Dana begins to dig into the mystery surrounding Ethan’s death. Sifting through the clues of his life, Dana finds herself back in the last years of their marriage . . . and discovers that their relationship—like Ethan’s death—wasn’t what it appeared to be.

A novel of marriage, meditation, and all the spaces in between, Soulmates is a page-turning mystery, a delicious satire of our feel-good spiritual culture, and a nuanced look at contemporary relationships by one of the sharpest writers working today.


Praise For Soulmates: A Novel…

“A zany whodunit that is compelling, funny, painful and wry, delivered by an author with her finger on the pulse of the current cultural zeitgeist.”
— Globe and Mail (Toronto)

“A whip-smart skewering of modern mysticism told with the urgency of a thriller. You’ll laugh, you’ll roll your eyes knowingly, and you’ll race to the end to find out whodunit.”
— Jessica Knoll, New York Times bestselling author of The Luckiest Girl Alive

“I devoured this fast-paced, evocative novel. Jessica Grose has a keen eye for detail, a killer sense of humor, and a gift for building suspense. She had me guessing until the final page.”
— J. Courtney Sullivan, New York Times bestselling author of Maine and The Engagements

“Funny, engaging, and, even given the violent deaths at the center of the story, ultimately lighthearted.”
— vogue.com

“Soulmates zigzags in a most effective way, lampooning the cult(ure) of spiritual growth as it makes you wonder if you might benefit from a few weeks with a guru. Grose has so much to say about breaking up, being alone, deciding what it means to be an adult.”
— Caroline Kepnes, author of You and Hidden Bodies

Jessica Grose is a writer and editor. She was previously a senior editor at Slate and an editor at Jezebel. Her work has appeared in the New York Times, Glamour, Marie Claire, Spin, and several other publications, and on Salon.com. She lives in Brooklyn with her husband.