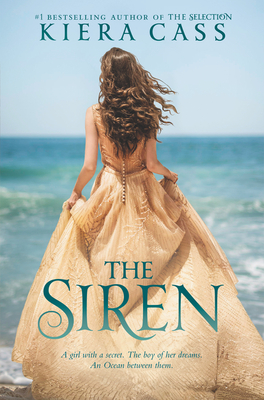 A sweeping stand-alone fantasy romance from Kiera Cass, author of the Selection series.

Kahlen is a Siren—bound to serve the Ocean by luring humans to their watery graves with her voice, which is deadly to any human who hears it. Akinli is human—a kind, handsome boy who’s everything Kahlen ever dreamed of. Falling in love puts them both in danger… but will Kahlen risk everything to follow her heart?

This star-crossed YA romance is sure to captivate readers who grew up loving The Little Mermaid or fans of Jennifer Donnelly’s Waterfire Saga.

Originally self-published, The Siren has been completely rewritten and redesigned for this beautiful hardcover edition.


Praise For The Siren…

“A cross between The Hunger Games (minus the bloodsport) and The Bachelor (minus the bloodsport), this trilogy launch is a lot of fun. Cass deftly builds the chemistry between America and Maxon, while stoking the embers of America’s first, forbidden love.”
— Publishers Weekly
or
Buy Here
Copyright © 2020 American Booksellers Association