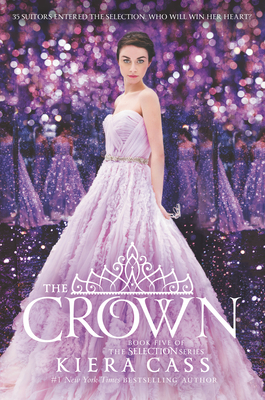 The Crown (The Selection #5)

Kiera Cass’s #1 New York Times bestselling Selection series has captured the hearts of readers from its very first page. Now the end of the journey is here. Prepare to be swept off your feet by The Crown—the eagerly awaited, wonderfully romantic fifth and final book in the Selection series.

In The Heir, a new era dawned in the world of The Selection. Twenty years have passed since America Singer and Prince Maxon fell in love, and their daughter is the first princess to hold a Selection of her own.

Eadlyn didn’t think she would find a real partner among the Selection’s thirty-five suitors, let alone true love. But sometimes the heart has a way of surprising you…and now Eadlyn must make a choice that feels more difficult—and more important—than she ever expected.


Praise For The Crown (The Selection #5)…

PRAISE FOR THE SELECTION SERIES: “A real page-turner. Romance, royalty, and revolution in a reality-show format serve Cass’ boldly rendered heroine well in her quest for justice and love.” — ALA Booklist

“An engrossing tale reminiscent of Shannon Hale’s Princess Academy and Ally Condie’s Matched. Fairy-tale lovers will lose themselves in America’s alternate reality and wish that the next glamorous sequel were waiting for them.” — School Library Journal

“Cass’s immensely readable debut novel is a less drastic Hunger Games, with elaborate fashion and trappings. The fast-paced action will have readers gasping for the upcoming sequel.” — ALA Booklist