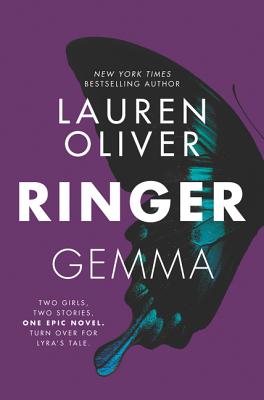 With its gripping companion novel, Replica, this remarkable novel by the author of Before I Fall and the Delirium trilogy asks how to be a human being, in a world where humanity cannot be taken for granted.

In the world outside of the Haven Institute, the replicas Lyra and Caelum are finding it hard to be human—and Lyra, infected at Haven with a terrible disease, finds her symptoms are growing worse. But in trying to find a cure, they uncover a shocking connection to their past, even as their future seems in danger of collapsing.

Gemma just wants to go back to her normal life after Haven. But soon, she learns that her powerful father has other plans for the replicas—unless she and her boyfriend Pete can stop him.

Bestselling author Lauren Oliver brings the Replica duology to a shocking close in Ringer. Like Gemma and Lyra, you won’t be able to leave the world of Haven behind after you’ve turned the last page.

“The third-person narration plunges along at a positively addicting pace. Speculative fiction at its core, Oliver’s novel is also a reflection on the nature of humanity as explored through the dualities of life/death, autonomy/ownership, truth/lies, and good/evil.”
— Kirkus Reviews

“The mirrored structure and flip book format work especially well here, as the two narratives connect but rely less on reimagining the same scenes, heightening the emotional resonance and providing double the suspense. This sequel is more exciting and a great deal steamier, with authentically bittersweet resolutions.”
— Booklist

“Like Replica, this entry is a flip book and can be read in either order or by alternating between Gemma’s and Lyra’s stories—yet the narratives are intertwined, making for an interesting reading experience for teens.... Bringing this duology to a close, this sequel will delight fans of the previous entry.”
— School Library Journal