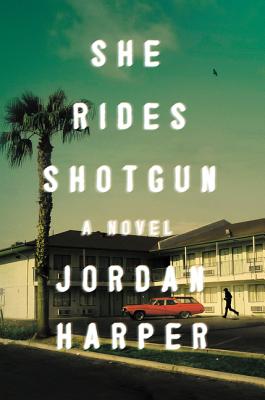 “Urgent and beautiful. The writing is as sharp as broken glass but it’s the characters who will stay with you, bloody hearts pinned on their sleeves and struggling for redemption and towards each other.”
— Lauren Beukes, author of The Shining Girls

“In Polly McClusky, the eleven-year-old girl at the heart of his darkly irresistible debut novel She Rides Shotgun, Jordan Harper gives us a hero for our times. With shades of Mattie Ross but an intelligence and fervor all her own, she is unforgettable.”
— Megan Abbott, author of You Will Know Me

“She Rides Shotgun has more kicks than any crime fiction out there, sure, but it’s also got a heart that’ll keep you up nights, slapping your head and pacing. Don’t try to tell me this is a debut novel; I won’t hear anything but Jordan Harper’s a master.”
— Benjamin Whitmer, author of Cry Father

“From its bravura prologue to its immensely satisfying ending, this first novel comes out with guns blazing and shoots the chambers dry. It’s both a dark, original take on the chase novel and a strangely touching portrait of a father-daughter relationship framed in barbed wire.”
— Booklist (starred review)

“An exquisitely violent father-daughter story, burns bright and fast. I kept waiting for the inevitable slow-down, but it never came. An extremely impressive debut.”
— Peter Swanson, author of The Kind Worth Killing

“Quite simply one of the best debuts I’ve ever read. Beautifully and lyrically written, it’s like a perfect song you hear for the first time and feel like you’ve always known it. It’s an instant classic and if I read a better novel this year I will be amazed.”
— Simon Toyne, author of Sanctus

“A electrifying thriller, a shattering family tragedy, and a pitch-black coming of age story...The language is searing, the action relentless, the beauty wrenched from ugliness truly astounding—this book will grab you by the throat and hang on tight until you’ve greedily swallowed every last word.”
— Robin Wasserman, author of Girls on Fire

“An impeccable crime novel with a giant heart, massive doses of hatred, vengeance, pain, and violence, and some of the sharpest, tightest prose you’ll encounter in 2017.”
— LitReactor

“She Rides Shotgun is a True Grit sort of saga, but on hot-wired horsepower instead of horseback. With Harper’s storytelling chops, it’s a rolling hell-bent adventure with all the snappy dialogue and action of the best noir fiction.”
— Shelf Awareness