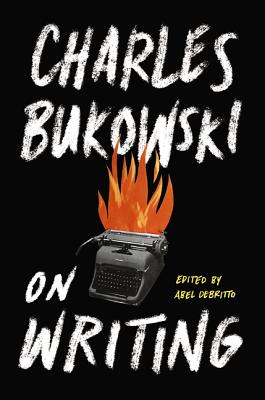 Sharp and moving reflections and ruminations on the artistry and craft of writing from one of our most iconoclastic, riveting, and celebrated masters.

Charles Bukowski’s stories, poems, and novels have left an enduring mark on our culture. In this collection of correspondence—letters to publishers, editors, friends, and fellow writers—the writer shares his insights on the art of creation.

On Writing reveals an artist brutally frank about the drudgery of work and canny and uncompromising about the absurdities of life—and of art. It illuminates the hard-edged, complex humanity of a true American legend and counterculture icon—the “laureate of American lowlife” (Time)—who stoically recorded society’s downtrodden and depraved. It exposes an artist grounded in the visceral, whose work reverberates with his central ideal: “Don't try.”

Piercing, poignant, and often hilarious, On Writing is filled not only with memorable lines but also with Bukowski’s trademark toughness, leavened with moments of grace, pathos, and intimacy.


Praise For On Writing…

“The letters are a wild ride informed in equal parts by ego, alcoholism, misanthropy, erudition, and the genius, as Bukowski puts it, of one ‘touched by the grace of the word.”
— Publishers Weekly

“By turns, the poet’s letters are humorous, boastful, self-deprecating, and angry at the world, but they are always entertaining. VERDICT: Bukowski fans will welcome this new collection tied to the celebration of what would have been his 95th birthday.”
— Library Journal