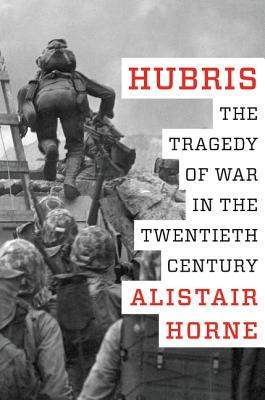 
Praise For Hubris: The Tragedy of War in the Twentieth Century…

“Eminently provocative and readable. Mr. Horne brilliantly reconstructs this long-forgotten battle [the 1939 Battle of Nomonhan]….It’s as if he has discovered a hidden spring for which mighty rivers of blood were to flow.”
— Wall Street Journal

“Stark and compelling… Horne has a flair for wrenching detail…Rather than simply listing statistics, he makes the toll of arrogance and historical amnesia vivid through specific, harrowing stories.”
— Boston Globe

“For more than half a century, Alistair Horne has written important books about the relationship between strategy, diplomacy, and statecraft. His latest volume continues that extraordinary effort. Herein he has brilliantly analyzed six battles of the twentieth century whose dimensions changed the course of history.”
— Henry Kissinger, author of World Order and On China

“...Sir Alistair makes [his case] with erudition and eloquence....This is a book that any political leader contemplating military action should read.”
— The Economist

“Students of military tactics and general readers will take pleasure in the new insights into these selected battles expressed by this knowledgeable and accessible writer.”
— Library Journal

“I can think of no one better to tackle the daunting subject of hubris and the punishments that so often follow than Alistair Horne. He brings the necessary wisdom, vast knowledge of the past, and understanding of human nature to show the effects of hubris in modern warfare.”
— Margaret MacMillan, author of The War That Ended Peace and Paris 1919

“Like a good Bordeaux, and unlike a good mathematician, a good historian improves with age. This is Alistair Horne’s twenty-fifth book, and it is filled with the insights that can only come from a lifetime of studying war.”
— Niall Ferguson, Laurence A. Tisch Professor of History at Harvard University; Senior Fellow at the Hoover Institution, Stanford University; and author of The Pity of War and The War of the World

Sir Alistair Horne is the author of over twenty books on history and politics. They include A Savage War of Peace: Algeria 1954-1962 (winner of the Wolfson Prize); The Price of Glory: Verdun 1916 (winner of the Hawthornden Prize); How Far from Austerlitz?: Napoleon 1805-1815 ; and Seven Ages of Paris . In 1969, he founded the Alistair Horne Fellowship to help young historians at St. Antony's College, Oxford. He was awarded the French Legion d'honneur in 1993 and received a knighthood in 2003 for his work on French history. Horne and his artist wife, Sheelin, live in Oxfordshire.