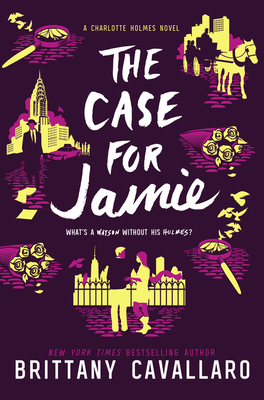 It’s been a year since the shocking death of August Moriarty, and Jamie and Charlotte haven’t spoken.

Jamie is going through the motions at Sherringford, trying to finish his senior year without incident, with a nice girlfriend he can’t seem to fall for.

Charlotte is on the run, from Lucien Moriarty and from her own mistakes. No one has seen her since that fateful night on the lawn in Sussex—and Charlotte wants it that way. She knows she isn’t safe to be around. She knows her Watson can’t forgive her.

Holmes and Watson may not be looking to reconcile, but when strange things start happening, it’s clear that someone wants the team back together. Someone who has been quietly observing them both. Making plans. Biding their time.

Someone who wants to see one of them suffer and the other one dead.


Praise For The Case for Jamie (Charlotte Holmes Novel #3)…

“Beautiful prose, thrilling action, a touch of romance, and two complicated heroes to root for make this a not-to-be-missed sequel. Readers will be craving the final book in the trilogy. ” — Booklist (starred review) on The Last of August

“Fans of the first Charlotte Holmes novel, A Study in Charlotte, will not be disappointed, and readers who are new to these characters will savor the fast-paced plot....This series is entirely un-put-downable. The Last of August will definitely leave readers anxiously awaiting the next installment.” — Voice of Youth Advocates (VOYA)