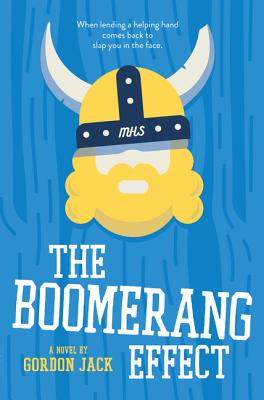 A hilariously subversive YA debut that explores the meaning of friendship and loyalty, and also why you should avoid being trapped in a small space with an angry chicken. Perfect for fans of Andrew Smith’s Winger and Frank Portman’s King Dork.

It all started with a harmless prank. But now high school junior Lawrence Barry is one step away from reform school unless he participates in a mentorship program. His mentee? Spencer Knudsen, a Norwegian exchange student with Spock-like intelligence but the social skills of the periodic table.

Then disaster strikes. Homecoming Week. When someone dressed as the school Viking mascot starts destroying the fairytale-inspired floats, all suspicion falls on Lawrence. Add to the mix a demon Goth girl, a Renaissance LARPing group, an overzealous yearbook editor, and three vindictive chickens, and Lawrence soon realizes that his situation may be a little out of control. But Spencer seems to have some answers. In fact, Spencer may be the one friend Lawrence never knew he needed.


Praise For The Boomerang Effect…

Jack’s impeccable comedic timing and ear for dialogue make this an irresistible, absurdist romp with a lovable Ferris Bueller–type raconteur. Jack manages to explore serious topics like drug abuse, sex, racism, sexism, and ableism through an honest and multidimensional lens that teen readers will appreciate.
— ALA Booklist

This laugh-out-loud YA debut offers a profound meditation on the narrow definitions of “normal,” how “to stand out and simultaneously blend in,” and how growing up means valuing difference and looking at the world with more self-aware eyes. Highly recommended.
— School Library Journal

“Lawrence’s back story feels genuine, and readers will feel sympathy for him. His self-conscious humor is funny. The upbeat ending fits well.”
— Kirkus Reviews

“Action-packed and often hilarious. The large, diverse cast of supporting characters is wonderfully drawn and adds to the depth and humor of this debut novel. This is a great read that fans of humorous stories, misfits of all stripes, and teenage boys especially will enjoy.”
— Voice of Youth Advocates (VOYA)

Gordon Jack always wanted to be a writer. In third grade, he put that on his “What I Want to Be When I Grow Up” list, just behind astronaut and professional dog walker. While working toward this goal, he had jobs as an advertising copywriter, English teacher, librarian, and semiprofessional dog walker. The Boomerang Effect is his first novel. He lives in San Francisco with his family. Visit him online at www.gordon-jack.com or on Twitter @gordojack.
Loading...
or
Not Currently Available for Direct Purchase