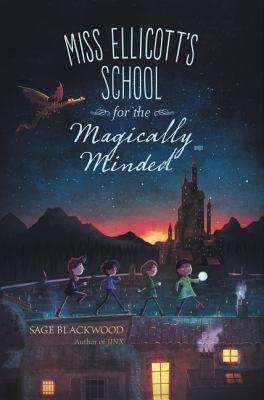 From the author of the acclaimed Jinx trilogy comes a spellbinding fantasy, perfect for fans of the School for Good and Evil series, about a young heroine fighting to save a world that would dare to tame her.

Chantel would much rather focus on her magic than on curtsying, which is why she often finds herself in trouble at Miss Ellicott’s School for Magical Maidens. But when Miss Ellicott mysteriously disappears along with all the other sorceresses in the city, Chantel’s behavior becomes the least of her problems.

Without any magic protecting the city, it is up to Chantel and her friends to save the Kingdom. On a dangerous mission, Chantel will discover a crossbow-wielding boy, a dragon, and a new, fiery magic that burns inside her—but can she find the sorceresses and transform Lightning Pass into the city it was meant to be?


Praise For Miss Ellicott's School for the Magically Minded…

Praise for MISS ELLICOTT’S SCHOOL FOR THE MAGICALLY MINDED: “Chantel is a magical heroine to be celebrated, deportment notwithstanding.” — Kirkus Reviews

“This book features a strong plot and well-developed characters. Readers who enjoyed Blackwood’s earlier works will not be disappointed. Hand this to fans of Diana Wynne Jones and Shannon Hale. This clever fantasy is a strong purchase for most middle grade collections.” — School Library Journal

“This extraordinary fantasy...has everything a reader might desire: thrilling suspense, a courageous and smart heroine, an elaborately constructed plot, a vivid setting and a moral grounding and nuance reminiscent of Kristen Cashore’s marvelous “Graceling” books for teen readers.” — Buffalo News

“’Magical maiden’ Chantel’s biggest challenge in her education to become a proper and correct sorceress is ‘deportment.’ A magical-school story with welcome diversity (Chantel is black), unexpected reveals, and thrilling surprises.” — The Horn Book

Praise for JINX’S FIRE: “Blackwood offers a story of enchanting texture and depth, and series fans will be elated to have another outing with the sweetly sardonic hero, whose conscience is almost as troublesome as his grasp of spells. Fans of Cornelia Funke should add this to their stacks.” — ALA Booklist

Praise for JINX’S FIRE: “A solid conclusion to a trilogy...threaded with proper amounts of heroism, humor and ingenious twists of character.” — Kirkus Reviews

Praise for JINX’S MAGIC: “This series deserves a permanent place in the children’s fantasy pantheon, with Narnia and Earthsea.” — Booklist (starred review)

Praise for JINX’S MAGIC: “As Blackwood extends Jinx’s experiences to other lands, she adds layers of complexity that hint at future developments. The next installment can’t come along soon enough.” — School Library Journal