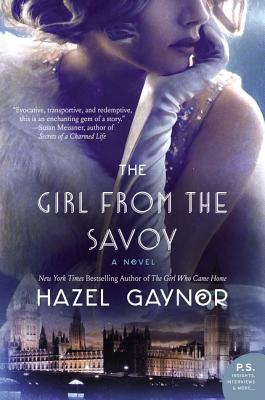 The Girl from The Savoy

Presenting a dazzling new historical novel … The Girl From The Savoy is as sparkling as champagne and as thrilling as the era itself.

‘Sometimes life gives you cotton stockings. Sometimes it gives you a Chanel gown …’

Dolly Lane is a dreamer; a downtrodden maid who longs to dance on the London stage, but her life has been fractured by the Great War. Memories of the soldier she loved, of secret shame and profound loss, by turns pull her back and spur her on to make a better life.

When she finds employment as a chambermaid at London’s grandest hotel, The Savoy, Dolly takes a step closer to the glittering lives of the Bright Young Things who thrive on champagne, jazz and rebellion. Right now, she must exist on the fringes of power, wealth and glamor—she must remain invisible and unimportant.

But her fortunes take an unexpected turn when she responds to a struggling songwriter’s advertisement for a ‘muse’ and finds herself thrust into London’s exhilarating theatre scene and into the lives of celebrated actress, Loretta May, and her brother, Perry. Loretta and Perry may have the life Dolly aspires to, but they too are searching for something.

Now, at the precipice of the life she has and the one she longs for, the girl from The Savoy must make difficult choices: between two men; between two classes, between everything she knows and everything she dreams of. A brighter future is tantalizingly close—but can a girl like Dolly ever truly leave her past behind?


Praise For The Girl from The Savoy: A Novel…

“Hazel Gaynor captures both the heartache and hope of England between the Wars in this richly imagined novel peopled with unforgettable characters, impossible ambitions and unexpected twists of fate. Once begun, I dare you to put it down.” — Kathleen Tessaro, New York Times bestselling author

“A disarmingly charming story of a young woman determined to make her dreams a reality... as sweet as a love song, as energetic as a tap dance and full of dazzling details about life in London after the disasters of the Great War. I won’t soon forget Dolly Lane...” — Jeanne Mackin, author of THE BEAUTIFUL AMERICAN

“Hazel Gaynor’s artistry as a storyteller shimmers like satin in THE GIRL FROM THE SAVOY. Evocative, transportive and redemptive, this is an enchanting gem of story.” — Susan Meissner, author of Secrets of a Charmed Life

changing and women, especially, were fighting for greater independence. What did you

enjoy about this period? Was there anything that surprised you?

hotels like The Savoy. What did you enjoy about the chapters where we go “behind the

scenes” at the hotel?

The novel has a large cast of principal and supporting characters. Who was your favorite

The working classes were often taken advantage of by their superiors during this period.

What was your reaction to the scene between Dolly and her employer’s nephew, and to

the incident between Dolly and Larry Snyder?

real issue in the 1920s. Were you surprised to learn about Dolly’s pregnancy and her

time at the Mothers’ Hospital? What was your reaction when she discovers that Thomas

nature. What were your thoughts as their relationship develops?

fighting their own private battles. Who were you rooting for, and why?

Loretta is an iconic star of the stage, adored by legions of fans everywhere she goes.

There are many female friendships in the novel: Dolly and Clover, Dolly and the girls at

the hotel, Dolly and Loretta, Loretta and Bea. Which was your favorite friendship to see

develop? Why do you think female friendships were so important during this era?

Teddy returns from the war suffering from a severe form of shell shock, a very

misunderstood condition during and after the Great War. What surprised you the most

about Teddy’s condition and treatment? How did the discovery that Dolly was Teddy’s

“nurse” affect your connection with them both?

The final scene at the train station in many ways mirrors the opening prologue. Did you

want Teddy to stay at the end? What was your reaction when Dolly finds the book on the

bench and reads his letter?

Ultimately, Dolly leaves for America without any romantic attachment in order to chase

her dreams, and the epilogue offers an insight into her future. What would you like Dolly

to have done in the intervening years?