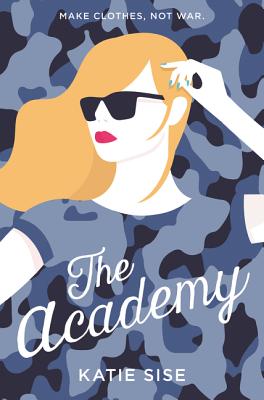 The Devil Wears Prada meets Private Benjamin in this funny and charming story of a fashionista teen blogger who gets sent to military school, perfect for fans of Sarah Mlynowski and Kasie West.

Frankie Brooks knows what she wants in life: to become the world’s next great fashion editor. All she needs to do is get into the elite American Fashion Academy in New York City. If she gets in, her life plans will be going right on schedule. Anna Wintour, watch out.

But after Frankie messes up one too many times—hey, it’s hard not to prioritize her acclaimed fashion blog above all else—her parents come up with entirely different plans for her future: military school. How is Frankie, the least athletic person in the world, who knows absolutely nothing about the military, going to survive a whole semester at the famed—and feared—Academy?

With classmates who seem to be totally uninterested in her, a course load that’s even more difficult than her old school’s, and the weird War Games competition she has to join, Frankie finds that her life is way tougher than it used to be. And no one, including her roommate Joni, seems to understand Frankie at all.

As she learns how to cope with impossible military drills and intimidating specialized classes and is maybe even falling for super-hot and super-smart cadet Jack Wattson, can Frankie prove to everyone that being a fashionista doesn’t mean she can’t succeed?


Praise For The Academy…

Praise for THE BOYFRIEND APP: “Sexy, irresistible, page-turning fun. You’re going to want a boyfriend app—right now!”
— Sarah Mlynowski, bestselling author of Ten Things We Did (And Probably Shouldn’t Have)

Praise for THE BOYFRIEND APP: “Sise creates a clever, independent-minded heroine, while exploring the drawbacks of modern technology.”
— Publishers Weekly