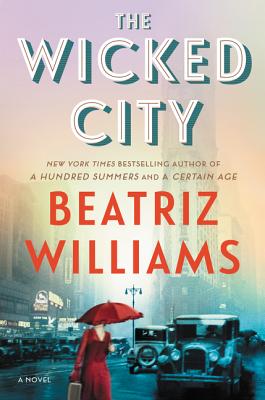 A Novel (The Wicked City series #1)

Bestselling author Beatriz Williams brings together two generations of women inside a Greenwich Village apartment—a flapper hiding an extraordinary past, and a modern-day Manhattanite forced to start her life anew.

When she discovers her banker husband has been harboring a secret life, Ella Gilbert escapes their sleek SoHo loft for a studio in a quaint building in Greenwich Village. But her new refuge isn't quite what it seems. Her charismatic musician neighbor, Hector, warns her to stay out of the basement after midnight, when a symphony of mysterious noise strikes up—laughter, clinking glasses, jazz piano, the occasional bloodcurdling scream—even though it's stood empty for decades. Back in the Roaring Twenties, the building hosted one of the city’s most notorious speakeasies.

In 1924, Geneva "Gin" Kelly, a quick-witted flapper from the hills of western Maryland, is a regular at this Village hideaway known as the Christopher Club. Caught up in a raid, Gin lands in the office of Prohibition enforcement agent Oliver Anson, who persuades her to help him catch her stepfather, Duke Kelly, one of Appalachia’s most notorious bootleggers.

Sired by a wealthy New York scion who abandoned her showgirl mother, Gin is nobody’s fool. She strikes a risky bargain with the taciturn, straight-arrow Revenue agent, even though her on-again, off-again Princeton beau, Billy Marshall, wants to make an honest woman of her and heal the legacy of her hardscrabble childhood. Gin's alliance with Anson rattles Manhattan society, exposing sins that shock even this free-spirited redhead—sins that echo from the canyons of Wall Street to the mountain hollers of her hometown.

As Ella unravels the strange history of the building—and the family thread that connects her to Geneva Kelly—she senses the Jazz Age spirit of her incandescent predecessor invading her own shy nature, in ways that will transform her life in the wicked city. . .

1. What do you make of the advice Ella gets from her mother about “starter marriages”: “It’s nothing to be ashamed of. As long as you haven’t got kids, you just move on. Move on, move up.” Is she just trying to make her daughter feel better about a bad situation, or is this advice Ella should take?

2. Ginger observes at first that Anson and Duke Kelly are exactly the same: “You just want to get a little something out of me, whether I like it or not, and you don’t ever mean to pay me back for my trouble.” Are there similarities between Anson and Duke Kelly? Between Duke and Ginger?

3. Why does Ella observe that “she hadn’t chosen this apartment, after all. The apartment had chosen her.”

5. Carl Green tells Ginger that while he doesn’t love Duke Kelly, “I don’t hold with no government men, either, telling us what we can drink and not drink…I would surely rather take my orders from Duke Kelly than from some rich fellow in Washington, some swell with the dough to fill up hi cellar before the axe set to falling, enough booze to last him until kingdom come.” Do you agree? Would Ginger agree, if it weren’t for her hatred of Duke Kelly?

6. Ginger says she’s never recognized as the Redhead of the infamous nude postcards because “I guess people see what they want to see.” Is that true?

7. Despite the radical difference in their backgrounds, Billy offers Ginger marriage, a comfortable home, and an easy life, even though he knows his family would oppose their union. Is she right to turn him down? Would you have done the same?

8. When we meet Ella’s thrice-divorced elderly Aunt Julie, does she seem like the same vivacious party girl Ginger Kelly befriended in the 1920s? How is she changed? Or not changed?

9. Was Ginger right to take her sister Patsy with her when she and Anson flee River Junction?

10. What do you think will happen to Ginger and Ella in The Wicked Redhead, the next novel in this series? What clues did the author leave you in this novel?