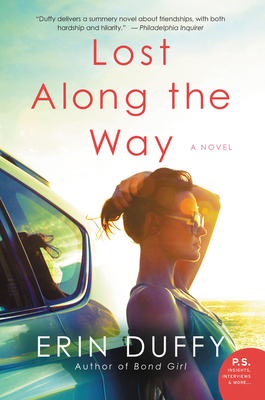 Lost Along the Way (Paperback)

A fresh, funny, and insightful novel about what it really means to be “friends forever” from the acclaimed author of Bond Girl and On the Rocks.

All through childhood and adolescence, Jane, Cara, and Meg swore their friendship would stand the test of time. Nothing would come between them, they pledged. But once they hit their twenties, life got more complicated and the BFFs began to grow distant. When Jane eloped with her slick, wealthy new boyfriend and didn’t invite her oldest friends to the ceremony, the small cracks and fissures in their once rock-solid relationship became a chasm that tore them apart.

Ten years later, when her husband is arrested and publically shamed for defrauding his clients, Jane realizes her life among the one percent was a sham. Penniless and desperate, deserted by the high-society crowd who turn their surgically perfected noses up at her, she comes crawling back to her childhood friends seeking forgiveness. But Cara and Meg have troubles of their own. One of them is trapped in a bad marriage with an abusive husband, while the other can't have the one thing she desperately wants: a baby. Yet as much as they’d love to see Jane get her long overdue comeuppance, Cara and Meg won’t abandon their old friend in her time of need.

The story of three friends who find themselves on a laugh-out-loud life adventure, Lost Along the Way illuminates the moments that make us, the betrayals that break us, and the power of love that helps us forgive even the most painful hurts.

Erin Duffy graduated from Georgetown University with a B.A. in English and worked on Wall Street, a career that inspired her first novel, Bond Girl. She lives in New York City with her husband (whom she met the old-fashioned way—in a bar).


Praise For Lost Along the Way: A Novel…

“Bond Girl is witty and very racy...Trust me, you won’t be bored with this Wall Street story.”
— Washington Post

“Bond Girl is a sparkling debut, smart and snappy but never weighed down by financial terminology. Who knew Wall Street could be this much fun? A-”
— Entertainment Weekly on BOND GIRL

Praise for On the Rocks: “Alternately humorous and touching, this novel is a fast, fun read…[Abby] is someone you’d want to friend, freezer full of ice cream and all.”
— Romantic Times, four stars on ON THE ROCKS

“With its more realistic and modern ending, this engaging novel offers readers relaxing and light yet thoughtful summer escape.”
— Library Journal on ON THE ROCKS

“Duffy’s second novel is tenderly introspective. . . . Abby’s attempts to navigate the everchanging rules of dating are infinitely relatable and will prove to be an ideal beach read for fans of Elin Hilderbrand and Sarah Pekkanen.”
— Booklist on ON THE ROCKS

“Despite financial details that may make your head spin and a workplace that will make your stomach churn, Duffy’s fresh take on the single-in-the-city tale does a terrific job of reviving chick lit (not every girl works in publishing or PR, after all).”
— Library Journal (starred review)

“Told in first person in Alex’s voice — and what an appealing voice it is, one that makes Alex likable from the first page — “Bond Girl” is a smartly written comic novel that’s great fun to read.”
— Richmond Times-Dispatch

“If you’re looking for a great weekend retreat or a great book for the beach, look for this one. For any woman who’s ever had a love-hate-detest relationship with a job Bond Girl is truly perfect.”
— Wisconsin Rapids Tribune on BOND GIRL

“Duffy (Bond Girl) effortlessly explores complex issues, especially how much pressure women put on themselves and one another to be perfect and have everything together. ”
— Library Journal on LOST ALONG THE WAY

“Duffy delivers a summery novel about friendships, with both hardship and hilarity.”
— Philadelphia Inquirer on LOST ALONG THE WAY
or support indie stores by buying on
Copyright © 2020 American Booksellers Association