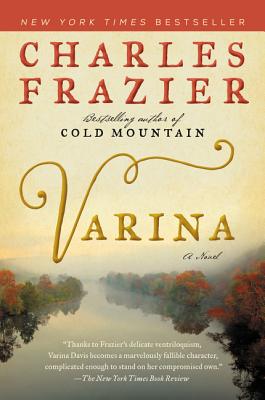 “In the elegant and compelling prose that made Cold Mountain an award-winning bestseller, Charles Frazier brings to life Varina Howell Davis, the wife of the president of the Confederacy, Jefferson Davis. Varina is told in two voices: Varina's and Jimmie Limber's, the black boy she raises as a son and is forced to abandon as she and her children flee Richmond while the Confederacy crumbles. When Jimmie and Varina reunite years later and relive the cataclysmic events of the war years, they examine the morality and consequences of Varina's - and a nation's - choices. As great literature often does, this novel forced me to look at my own actions and attitudes with a more critical eye.”
— Sarah Goddin, Quail Ridge Books, Raleigh, NC
View the List

Sooner or later, history asks, which side were you on?

In his powerful new novel, Charles Frazier returns to the time and place of Cold Mountain, vividly bringing to life the chaos and devastation of the Civil War

Her marriage prospects limited, teenage Varina Howell agrees to wed the much-older widower Jefferson Davis, with whom she expects the secure life of a Mississippi landowner. Davis instead pursues a career in politics and is eventually appointed president of the Confederacy, placing Varina at the white-hot center of one of the darkest moments in American history–culpable regardless of her intentions.

The Confederacy falling, her marriage in tatters, and the country divided, Varina and her children escape Richmond, Virginia, and travel south on their own, now fugitives with “bounties on their heads, an entire nation in pursuit.”

Intimate in its detailed observations of one woman’s tragic life, and epic in its scope and power, Varina is a novel of an American war and its aftermath. Ultimately, the book is a portrait of a woman who comes to realize that complicity carries consequences.


Praise For Varina: A Novel…

“Frazier works on an epic scale, but his genius is in the details--he has a scholar’s command of the physical realities of early America and a novelist’s gift for bringing them to life.” — Time

“Perfectly evocative . . . A finely wrought novel that will reward rereading. Elegiac without being exculpatory, it is an indictment of complicity without ignoring the historic complexity of the great evil at the core of American history.” — Washington Post

“Beautifully rendered…Frazier in this, his fourth novel, lyrically resurrects the blasted but hauntingly beautiful Southern landscape just after the war...Varina Davis becomes a marvelously fallible character, complicated enough to stand on her compromised own.” — The New York Times

Charles Frazier is the author of Cold Mountain, an international bestseller that won the National Book Award and was adapted into an Academy-Award winning film by Anthony Minghella. He is also the author of the bestselling novels Thirteen Moons and Nightwoods.
Loading...
or support indie stores by buying on