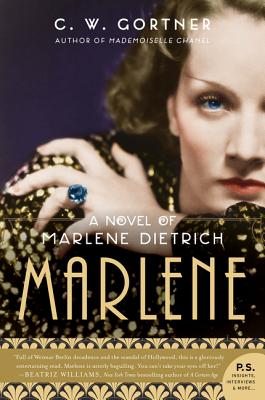 A lush, dramatic biographical novel of one of the most glamorous and alluring legends of Hollywood’s golden age, Marlene Dietrich—from the gender-bending cabarets of Weimar Berlin to the lush film studios of Hollywood, a sweeping story of passion, glamour, ambition, art, and war from the author of Mademoiselle Chanel.

Raised in genteel poverty after the First World War, Maria Magdalena Dietrich dreams of a life on the stage. When a budding career as a violinist is cut short, the willful teenager vows to become a singer, trading her family’s proper, middle-class society for the free-spirited, louche world of Weimar Berlin’s cabarets and drag balls. With her sultry beauty, smoky voice, seductive silk cocktail dresses, and androgynous tailored suits, Marlene performs to packed houses and becomes entangled in a series of stormy love affairs that push the boundaries of social convention.

For the beautiful, desirous Marlene, neither fame nor marriage and motherhood can cure her wanderlust. As Hitler and the Nazis rise to power, she sets sail for America. Rivaling the success of another European import, Greta Garbo, Marlene quickly becomes one of Hollywood’s leading ladies, starring with legends such as Gary Cooper, John Wayne, and Cary Grant. Desperate for her return, Hitler tries to lure her with dazzling promises. Marlene instead chooses to become an American citizen, and after her new nation is forced into World War II, she tours with the USO, performing for thousands of Allied troops in Europe and Africa.

But one day she returns to Germany. Escorted by General George Patton himself, Marlene is heartbroken by the war’s devastation and the evil legacy of the Third Reich that has transformed her homeland and the family she loved.

An enthralling and insightful account of this extraordinary legend, Marlene reveals the inner life of a woman of grit, glamour, and ambition who defied convention, seduced the world, and forged her own path on her own terms.

C. W. Gortner is the author of many bestselling historical novels—including Mademoiselle Chanel—which have been published in more than twenty countries. He lives in San Francisco.

1. Marlene’s mother is stern and very strict about correct manners and work ethic: “Tu etwas was her motto: ‘Do something.’ We’d learned that idleness was the worst sin of all, one we must avoid at any cost.” Marlene rebels against her mother’s rigidity, but does she reject her mother’s obsession with hard work or imitate it?

2. Marlene’s grandmother tells her: “Beauty is fleeting. We must enjoy what we have before time steals it away.” Is that good advice? How does Marlene use it as she goes through life?

3. Why does Marlene blossom in Weimar Berlin? And why does she thrive in Hollywood, despite being an immigrant with limited English? What about each place suits her, personally and professionally?

4. When Gary Cooper asks Marlene if she loves her husband she says, “Yes. I do. There are many kinds of love.” Do you think he would say the same about their marriage? What keeps Marlene and Rudi together when there are so many other lovers in their lives?

5. Marlene has many love affairs with both men and women and never apologizes for it. Are we meant to admire this or condemn it?

6. Marlene says of her relationship with her only child, Maria: “I fought against the remorseful guilt that I’d not been a very good mother. I hadn’t meant to neglect her, for I loved her so much, but I’d done just that. I’d…never solicited her opinions, afraid of her answers, which might mean I’d have to cease living my life that way.” Did Marlene pursue her career at her daughter’s expense? Would a male screen star have done the same and felt guilty about it? Why was motherhood so difficult for Marlene?

7. Was Marlene right to deny knowing her sister Liesl when she discovers that she’d been living a privileged life while her husband worked in a concentration camp? Why does she ultimately change her mind and grudgingly acknowledge their relationship? What would you have done in her shoes?

8. When Marlene sees her mother in post-war Berlin, her mother tells her “We are not responsible. We are good Germans. Some of us have always been good Germans.” What does it mean to be a “good German?” Why does she believe Marlene to be one as well?

9. Why do you think C. W. Gortner chose to end the novel with Marlene finally meeting the elusive Greta Garbo? What did that moment mean to Marlene? What did it mean to you, the reader?

10. Marlene Dietrich famously said that “I am, at heart, a gentleman.” Now that you’ve read part of her life story, what do you think she meant by that?