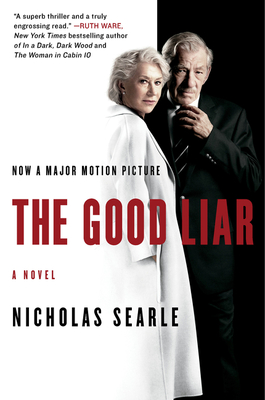 “A superb thriller and a truly engrossing read.”—Ruth Ware, New York Times bestselling author of In a Dark, Dark Wood and The Woman in Cabin 10

When Roy meets a wealthy widow online, he can hardly believe his luck. Just like Patricia Highsmith’s Tom Ripley, Roy is a man who lives to deceive—and everything about Betty suggests she’s an easy mark. He’s confident that his scheme to swindle her will be a success. After all, he’s done this before.

Sure enough, Betty soon lets Roy move into her beautiful home, seemingly blind to the web of lies he’s woven around her. But who is Roy, really? Spanning almost a century, this stunning and suspenseful feat of storytelling interweaves the present with the past. As the clock turns back and the years fall away, long-hidden secrets are forced into the light. Some things can never be forgotten. Or forgiven.


Praise For The Good Liar: A Novel…

“A gut-clenching cat-and-mouse game…. This debut novel is a wellcrafted, complex tale that will appeal to fans of psychological thrillers.”
— Booklist

“If you like Patricia Highsmith’s Mr. Ripley books…this is an excellent debut indeed.”
— BookPage.com

“Engrossing. . . . An elegantly structured long con. The pace is almost maddeningly deliberate, with details about the characters and their schemes doled out like a controlled substance, but patient readers will be rewarded with devastating third-act twists and a satisfying denouement.”
— Publishers Weekly

“[A] fantastically assured debut…. The Good Liar makes you want to experience Nicholas Searle’s next trick.”
— The Guardian

“I was engrossed…. As deceiver and deceived move towards each other with hypnotic predestination, the plot unfolds to a payoff as inevitable as it is shocking. A superb thriller and a truly engrossing read.”
— Ruth Ware, New York Times bestselling author of In a Dark, Dark Wood

“The Good Liar is a taut, compulsive thriller with a dark, intriguing heart. A Mr Ripley for our time.”
— Jonathan Freedland, author of The 3rd Woman

“What a clever and menacing novel The Good Liar is. I was gripped and horrified in equal measure and the ending knocked me sideways! I can’t wait for everyone to read the book so I can talk about it.”
— Nina Stibbe, author of Love, Nina

“As the tension mounts, the reader is kept guessing….The final denouement is a real cracker… Added to the fiendishly clever plot, Searle’s writing is both drily amusing and elegantly crafted.”
— Daily Mail

“One of 2016’s most intriguing debut novels.”
— The Independent (London)

“Searle paces the twists and turns of the plot admirably well…. Increasingly engaging and poised.”
— The Independent (London)

Nicholas Searle grew up in the southwest of England and studied languages at the University of Bath. He spent more years than he cares to remember in public service before deciding in 2011 to leave and begin writing fiction. The Good Liar is his first novel. Nicholas lives in the north of England.