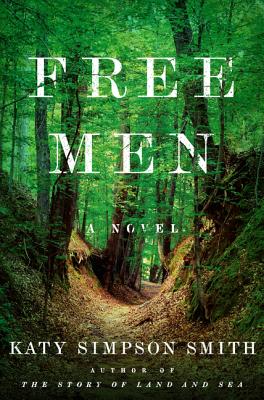 “We are lucky to be in a position to follow an amazing author at the start of her publishing career…Smith applies her close attention to historical subjects, a feel for evocative language and the undertone of a woman’s longing and adds to that structured suspense and epic ambition.” — Asheville Citizen-Times

“FREE MEN marries exhaustive research into the time period with effortless prose and insight into her characters that makes a story from several centuries ago feel immediate.” — Huffington Post

“…glimpses into a vanished but fully realized world, one which has completely engaged us by [the] novel’s satisfying end.” — Minneapolis Star Tribune

“Smith’s searching second novel probes connection and isolation, forgiveness and guilt…this novel evokes the complexity of a fledgling America in precise, poetic language…it is rich with insights about history and the human heart.” — Publishers Weekly

“Katy Smith made an auspicious entrance with The Story of Land and Sea. Now, in Free Men, she confirms her status as a truly distinctive and lyrical voice and in my judgment, the most sophisticated historical novelist of her generation. — Joseph J. Ellis, author most recently of The Quartet: Orchestrating the Second American Revolution, 1783-1789

“With this collage of experiences twisted together and soaked in blood, Smith cuts to the bone of our national character. Then, as now, for all its violence and desperation, it’s noble and inspiring, too.” — Washington Post

“…a brilliant, wild ride…. Not only does Smith step boldly into the terrain of the classics of the American canon, her novel feels like one of those classics. Smith has succeeded in writing a novel of American masculinity that deserves comparison with Cormac McCarthy, Jim Harrison and Herman Melville.” — Jackson Clarion-Ledger

“Illuminating…An uncommon story of three men on the run as well as a complex tale about freedom of the individual and justice in society. There’s much to ponder after reading the last page.” — Library Journal

“Katy Simpson Smith’s FREE MEN channels a world radically different and utterly similar to our own, and renders viscerally that quintessential American impulse to get yourself a new life.” — Jim Shepard, author of THE BOOK OF ARON

“I was immediately seduced by the quality of the prose, its meditative tone and haunting imagery—a poet’s imagery, thrilling in its uncanny detail—and richness. This is a deep, pondered world, a pleasure to experience and behold.” — Amanda Coplin, New York Times bestselling author of THE ORCHARDIST

“FREE MEN will have you gasping for breath…This is literature at its finest: a novel about another time that—rather than alienate—instead clarifies and brings into view our own time…this is a story about flawed but earnest men and the flawed but earnest women left behind.” — Hannah Pittard, author of THE FATES WILL FIND THEIR WAY