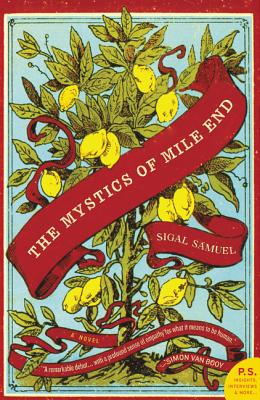 The Mystics of Mile End

Sigal Samuel’s debut novel, in the vein of Nicole Krauss’s bestselling The History of Love, is an imaginative story that delves into the heart of Jewish mysticism, faith, and family.

“This is not an ordinary tree I am making.

In the half-Hasidic, half-hipster Montreal neighborhood of Mile End, eleven-year-old Lev Meyer is discovering that there may be a place for Judaism in his life. As he learns about science in his day school, Lev begins his own extracurricular study of the Bible’s Tree of Knowledge with neighbor Mr. Katz, who is building his own Tree out of trash. Meanwhile his sister Samara is secretly studying for her Bat Mitzvah with next-door neighbor and Holocaust survivor, Mr. Glassman. All the while his father, David, a professor of Jewish mysticism, is a non-believer.

When, years later, David has a heart attack, he begins to believe God is speaking to him. While having an affair with one of his students, he delves into the complexities of Kabbalah. Months later Samara, too, grows obsessed with the Kabbalah’s Tree of Life—hiding her interest from those who love her most–and is overcome with reaching the Tree’s highest heights. The neighbors of Mile End have been there all along, but only one of them can catch her when she falls.


Praise For The Mystics of Mile End: A Novel…

“Rarely does one encounter a novel as full of charm and heart as Sigal Samuel’s riveting The Mystics of Mile End...A novel that takes up enormous questions - about the very nature of existence - with both profound intelligence and galloping humor. Before you crack open this book, be forewarned: You will fall in love.” — -- Joanna Rakoff, My Salinger Year

“A remarkable debut where varying perspectives on faith, family, and the search for meaning are explored by characters brought to life with a profound sense of empathy for what it means to be human.” — -- Simon Van Booy, author of Everything Beautiful Began After

“An absorbing tale of one family’s search for meaning, The Mystics of Mile End is a beautiful and at times heartbreaking read.” — - Anya Ulinich, author of Lena Finkle's Magic Barrel

“This skillfully spun story forces us to look at life’s toughest questions, while we marvel at its everyday beauty and heartbreak.” — - Lee Woodruff, author of In an Instant and Those We Love Most

“The ‘Mystics’ in Sigal Samuel’s charming and generous book may be found near the intersection of Nicole Krauss’s The History of Love, Jhumpa Lahiri’s The Namesake, and Mordecai Richler’s The Apprenticeship of Duddy Kravitz. This wonderfully self-assured debut explores the perils of faith and doubt.” — -- Adam Langer, Crossing California

“Every character in this outstanding first novel is searching for a reason to exist…The need for human relationships and mysticism’s relationship to life impel them forward…This heart-stopping narrative will keep readers glued until the very end.” — -- Library Journal Starred Review

“A family is pulled to Jewish mysticism...in this expansive saga about faith, love, and loss…The minor characters, ever present in the background, shine as their stories conclude powerfully…A tale about the stories we let ourselves believe.” — -- Kirkus Review

“An inventive debut novel, “The Mystics of Mile End” by Sigal Samuel (Morrow) is set in the Montreal Jewish neighborhood of Mile End, with questions of faith, religion and identity swirling about, as each member of a family dabbles in the Kabbalah.” — -- The Jewish Week

“With a refreshing new voice that has a dash of Anne Tyler and a sprinkling of Sholem Aleichem, Samuel explores the search for enlightenment in her standout debut...the author shows with heart and insight that what we seek is often right in front of us.” — Publishers Weekly

“Using a geometry of her own...Samuel draws a nigh-perfect circle in The Mystics of Mile End...that nourishes both the heart and mind. Samuel’s frugality in introducing characters and motifs results in a tightly focused and elegantly served novel that is something of a feast to read.” — -- Los Angeles Review of Books

“What’s most striking is [Samuel’s] ability to confidently imbue a story about a family struggling with contemporary issues with insight and humanity gleaned from age-old mystical texts.” — - Jewish Book World

“Samuel crafts an unforgettable narrative in which her characters fight to save each other from themselves and the unknown. THE MYSTICS OF MILE END will leave readers felling nourished with insight, emotion, and a healthy dose of Yiddish.” — -- Bust

Why do you think the author set this book in Montreal’s Mile End neighborhood? What does the setting add to the story?

David is depicted as a secular professor. Do you think he is a spiritual person, if not a religious one? How does his relationship with religion change after he is diagnosed with the heart murmur?

How are Lev and Samara different? How are they alike? Why do they adopt such opposite attitudes toward religion as they grow up?

Is Samara a sympathetic character? Why or why not? Is it important to your experience of the book that you like her?

Life? And why is the outcome different for each of them? Can you relate to this sort of obsession?

When Samara begins to climb the Tree of Life, she chooses to send letters to Alex. Why him?

Mr. Katz’s neighbors see him as deranged. Are there any moments that suggest he may not be so crazy after all? What do you imagine led to his obsession with recreating mystical trees?

In one of his stories, Mr. Glassman lists words that don’t exist but should. What do you think he wishes he could say to his wife, and what does he say after the book ends? What are some experiences that you wish you had words for?

A Jewish legend quoted in this book tells of four sages who enter a holy garden: one dies, one goes mad, one “cuts down the plantings,” and one comes out intact. Do you see parallels between them and the characters in this novel?

Where do you think Samara and Lev will be in ten years? What will their relationship be like over that decade? Will Jenny still be in their lives? Will Val?