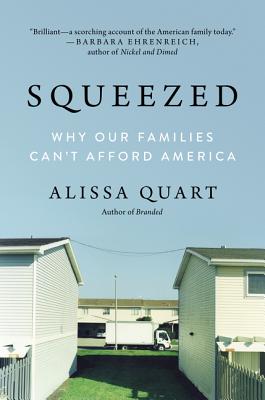 Why Our Families Can't Afford America

One of TIME’s Best New Books to Read This Summer

Families today are squeezed on every side—from high childcare costs and harsh employment policies to workplaces without paid family leave or even dependable and regular working hours. Many realize that attaining the standard of living their parents managed has become impossible.

Alissa Quart, executive editor of the Economic Hardship Reporting Project, examines the lives of many middle-class Americans who can now barely afford to raise children. Through gripping firsthand storytelling, Quart shows how our country has failed its families. Her subjects—from professors to lawyers to caregivers to nurses—have been wrung out by a system that doesn’t support them, and enriches only a tiny elite.

Interlacing her own experience with close-up reporting on families that are just getting by, Quart reveals parenthood itself to be financially overwhelming, except for the wealthiest. She offers real solutions to these problems, including outlining necessary policy shifts, as well as detailing the DIY tactics some families are already putting into motion, and argues for the cultural reevaluation of parenthood and caregiving.

Written in the spirit of Barbara Ehrenreich and Jennifer Senior, Squeezed is an eye-opening page-turner. Powerfully argued, deeply reported, and ultimately hopeful, it casts a bright, clarifying light on families struggling to thrive in an economy that holds too few options. It will make readers think differently about their lives and those of their neighbors.


Praise For Squeezed: Why Our Families Can't Afford America…

“The issue is overwhelmingly structural and social, not individual or moral. We haven’t failed; Capitalism has failed us. As Quart reminds her reader—and as every story in the book is meant to illustrate—the economic bind we find ourselves in cannot be solved by personal discipline or better financial decisions.” — New York Times Book Review

“Quart is a sympathetic listener, getting people to reveal not just the tenuousness of their economic situations but also the turbulence of their emotional lives... We could all use her expert guidance through the maze.” — New York Times

“An eye-opening look at the forces that make it harder than ever for the middle class to survive.” — People

“Squeezed captures well the toxic combination of American individualism and the disrupted evolution of particular professions that has left millions of millennials in a more fragile financial condition than they expected would be their lot in life.” — The Washington Post

“It’s not often that you can call a densely reported work of literary non-fiction about economic inequality a riveting page-turner, but Squeezed is just that.” — The Guardian

“In a nation beset by income inequality and riven by conflict, the conception of the quiet contentment of middle-class American life appears to be on the wane. . . . Alissa Quart . . . lucidly demonstrates that for many, the dream of such satisfaction is increasingly out of reach.” — Boston Globe

“The stories of a falling down middle class reflect a felt experience of anxiety that is often lost in data-driven tales of recession and recovery.” — Financial Times

“On the day that Alexandria Ocasio-Cortez accomplished her remarkable victory in the Democratic primary . . . a new book arrived, as if by cosmic fiat, to help explain the emerging realignments of the political order: Squeezed.” — Ginia Bellafante, The New York Times

“Squeezed captures the dazed uncertainty of a post-recession generation of would-be parents for whom stagnant wages and ever-rising housing costs make them can’t-be ones...Quart [has] a knack for immersive, in-depth reporting, as well as an often-bruised sense of unlikely optimism.” — Bitch Magazine

“Think of Alissa Quart’s new book . . . as “What to Expect When You’re Expecting Under Late Capitalism.” Of the more than 50,000 books listed on Amazon under ‘Parenting,’ few engage as deeply with the economic pressures today’s parents must navigate.” — In These Times

“Lucidly recounts . . . wrenching stories of economic hardship, while meticulously deconstructing some of the prevailing myths about middle-class life in the United States . . . Squeezed stands out for its insightful analysis of class dynamics in the United States.” — Minneapolis Star Tribune

“Eloquent and passionate . . . In deeply etched portraits of struggling professionals, Quart evokes how soaring costs and hostile social policy have trapped middle-class families in quicksands of debt and emotional stress.” — The Forward

“Quart captures how middle-class American families are struggling to attain the standard of living once enjoyed by their parents. [She] argues that higher earners, like most Americans, contend with income disparity and the extreme wealth enveloping metro regions.” — The American Conservative

“[Quart] shares familiar stories of economic frustration as well as hard evidence for the causes of it. It’s an often tough but deeply empathetic call to action, one that exists in the real world of family, work, debt and even dreams.” — Salon

“Reminiscent of Barbara Ehrenreich’s Nickel and Dimed . . . will resonate with those feeling squeezed, and inform those who are not.” — Library Journal

“Puts plain the economic predicament of the middle class in eloquent and heart-wrenching vividness.” — Electric Literature

“A powerful book. . . . The color of your collar, or your red or blue state, doesn’t matter. Quart reveals in this work that we’re in this together.” — Martha’s Vineyard Times

“Squeezed is at its absolute best when Quart combines her excellent reporting, rich with the perspective of that ‘Middle Precariat’, with a willingness to more openly and sharply decry the structural conditions that are giving way to such misery.” — PopMatters

“A disciplined journalist, Quart [frames] her facts and figures with unsettling personal stories of financial ruin... What stays with you is the precariousness and stress to which today’s capitalism subjects millions of even relatively privileged people.” — Plough

“A thoughtful, enlightening and painful analysis of the ever-growing divide in the American economy.” — BookPage

“Squeezed, like Nickel and Dimed . . . is worth reading if you’re invested in better understanding poverty in America.” — BITCH, “15 Books Feminists Should Read in June”

“A vivid prose stylist, Quart makes powerfully real what happens when those who were once middle class can now only window shop for the American Dream. She also offers crucial collective plans to get us out of our anguishing binds.” — Arlie Hochschild, author of Strangers in Their Own Land: Anger and Mourning on the American Right

“What Alissa Quart does so beautifully is weave together textured, compelling portraits of individual families with big ideas. Read this important book to understand the challenges your own family faces in parenting, housing, planning for the future—and read it to find out what to do about them!” — Peggy Orenstein, author of Girls & Sex and Don’t Call Me Princess

“Quart deftly chronicles the plight of Americans confronting the dangerous rise of Middle Class financial instability. Squeezed is journalism at its best: exploratory, visceral, and searching for answers. An important work to which attention should—and must—be paid.” — David Corn, author of Russian Roulette: The Inside Story of Putin’s War on America and the Election of Donald Trump

“Quart’s investigation, written with the elegance of a literary novel, forces us to examine the grave consequences of an economic structure that has crushed the very people it claims are at the heart of the American dream.” — Jeremy Scahill, author of Dirty Wars

“Profound, a sweeping, blistering portrait of hard-working people from all walks of life. It’s a rousing wakeup call that also points the way forward to a more equitable, expansive future.” — Astra Taylor, author of The People’s Platform: Taking Back Power and Culture in the Digital Age

“Alissa Quart is a modern James Agee. Squeezed gets deep inside the increasingly perilous financial lives of American families showing that they are collateral damage of our disappearing government. A damning, necessary and intensely vital book.” — Helaine Olen, author of Pound Foolish: Exposing the Dark Side of the Personal Finance Industry

Alissa Quart is the author of four previous books of nonfiction, including Squeezed and Branded, and two books of poetry. She is the executive director of the Economic Hardship Reporting Project and writes for publications including the Guardian, the Washington Post, and the New York Times. Her honors include an Emmy, a Nieman Fellowship, and Columbia University’s Journalism School Alumna of the Year. She lives with her family in Brooklyn.