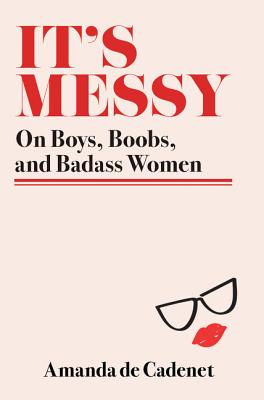 On Boys, Boobs, and Badass Women

In this deeply personal collection of essays, creator of the The Conversation Amanda de Cadenet shares the hard-won advice and practical insights she’s gained through her experiences as businesswoman, friend, wife, and mother.

Amanda is on a mission to facilitate conversations that allow all women to be seen, heard, and understood. Through her multimedia platform The Conversation, she interviews some of today’s most bad ass women—from Hillary Clinton to Lady Gaga—in no-holds-barred conversations that get to the heart of what means to be female. Now, in It’s Messy, Amanda offers readers an extension of that conversation, inviting them into her life and sharing her own story.

From childhood fame to a high-profile marriage (and divorce) to teen motherhood to the sexism that threatened to end her career before it started, Amanda shares the good, the bad, and the messy of her life, synthesizing lessons she’s learned along the way. Through it all, she offers an original perspective as a feminist on the front lines of celebrity culture. Edgy, irreverent, poignant and provocative, It’s Messy addresses the issues, concerns, and experiences relevant to women today.


Praise For It's Messy: On Boys, Boobs, and Badass Women…

“[Amanda is] iron-willed and eloquent…her humor and heart are apparent from the very first page. De Cadenet boasts a triumphant and storied past, and her essays are a treat to devour.” — Courtney Eathorne, Booklist (starred review)

“(De Cadenet) is like a wise older sister that commands your respect with her wit, humor, and no-nonsense advice giving.” — Erin Mckelle, Bustle

“Intimate and revealing, It’s Messy reads as part confessional memoir, part raw essay collection on the challenges—and power—of being a girl and woman in the world today.” — Goop

“A deep and brutally honest dive into the struggles of living under a microscope.” — Girlboss.com

“Serious and thought-provoking….the overwhelming feminist message on its pages is one of positive resurrection against all the odds. If you want advice on how to ignore the haters on the road to happiness, then this your next read.” — Sunday Times (UK)

“This collection of essays from the famed lady boss lives up to its title--from her high-profile divorce to sexism...yeah, it’s messy. But it’s also hilarious, inspirational and always, always honest.” — Entertainment Weekly, “Must List”

Amanda de Cadenet is a creative force with a lifelong career in the media. She began as a host on British television at the age of fifteen and became a sought-after photographer shortly after—as a result her impressive photography career already spans nearly twenty years. She is the youngest woman ever to shoot a Vogue cover and has photographed many of the most influential figures in popular and political culture. As a media entrepreneur, Amanda is the creator of The Conversation, a series that showcases her in-depth interviews on real topics with celebrated women. Whether it’s in conversations with Lady Gaga, Sarah Silverman, Zoe Saldana, Chelsea Handler, or Gwyneth Paltrow, or in discussions with devoted followers of her social channels, Amanda delivers an honest and authentic voice. The series has aired in eighteen countries and is featured online, with over ten million viewers. In January 2016, Amanda conducted an exclusive one-on-one interview with presidential candidate Secretary Clinton. In February 2016, Amanda launched #Girlgaze, a digital media company utilizing user submitted content and highlighting the work of women Gen Z photographers and directors.