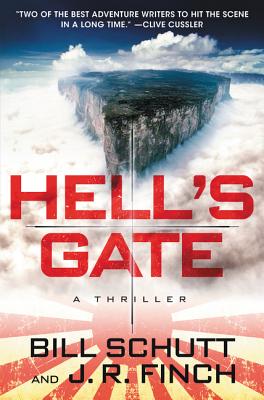 When a Japanese submarine is discovered abandoned deep in the Brazilian wilderness, a smart, adventurous, and tough zoologist must derail a catastrophic plot in Hell’s Gate.

1944. As war rages in Europe and the Pacific, Army Intel makes a shocking discovery: a 300-foot Japanese sub marooned and empty, deep in the Brazilian interior. A team of Army Rangers sent to investigate has already gone missing. Now, the military sends Captain R. J. MacCready, a quick-witted, brilliant scientific jack-of-all-trades to learn why the Japanese are there—and what they’re planning.

Parachuting deep into the heart of Central Brazil, one of the most remote regions on the planet, Mac is unexpectedly reunited with his hometown friend and fellow scientist Bob Thorne. A botanist presumed dead for years, Thorne lives peacefully with Yanni, an indigenous woman who possesses mysterious and invaluable skills. Their wisdom and expertise are nothing short of lifesaving for Mac as he sets out on a trail into the unknown.

Mac makes the arduous trek into an ancient, fog-shrouded valley hidden beneath a 2000-foot plateau, where he learns of a diabolical Axis plot to destroy the United States and its allies. But the enemy isn’t the only danger in this treacherous jungle paradise. Silently creeping from the forest, an even darker force is on the prowl, attacking at night and targeting both man and beast. Mac has to uncover the source of this emerging biological crisis and foil the enemy’s plans . . . but will he be in time to save humanity from itself?


Praise For Hell's Gate: A Thriller…

“Bill Schutt and J.R. Finch are two of the best adventure writers to hit the scene in a long time. They blend action and science into a read that opens the door to much, much more. My kind of book!”
— Clive Cussler on HELL'S GATE

“Working within chilling scientific plausibility, this two-fisted jungle adventure swerves unexpectedly down a path of heart-pounding suspense. What emerges from the darkness will haunt you long after you put the book down.”
— James Cameron, director/writer/explorer on HELL'S GATE

“This one pushes the envelope to the edge and beyond, with tension and imagination that crackles from the first page. A terrific story, terrifically told. So take a walk on the perilous side, if you dare.”
— Steve Berry, New York Times bestselling author of The 14th Colony on HELL'S GATE

“The authors adeptly balance science and suspense, and a detailed afterword lays out how much of the story line is based in history. Michael Crichton fans will be pleased that the ending leaves room for a sequel.”
— Publishers Weekly (starred review) on HELL'S GATE

“Coauthors Schutt and Finch are experts in the sciences, and the scenes involving the biology behind what’s really going on in the jungle-there’s a touch of horror in the mix-are fascinating.”
— Booklist on HELL'S GATE

“Hell’s Gate has everything I love in a book: rip-roaring action, strange-but-authentic science, and characters that pop right off the page. An adventure that harkens to the glory days of H. Rider Haggard and H.G. Wells. Warning: Do NOT miss this debut!”
— James Rollins, New York Times bestseller of The Bone Labyrinth on HELL'S GATE

“Scientifically accurate, and chillingly real; Schutt and Finch amplify the many perils that come with any expedition into the unknown. I dashed through Hell’s Gate--cover to cover--with white-knuckle fear of what might be lurking on the next page. Brace yourself, this is no ordinary thriller.”
— Darrin Lunde, Author of The Naturalist on HELL'S GATE

“Just think Indiana Jones. For that matter, this yarn evokes more than a few reminders of Stephen King, Joseph Conrad, and Bram Stoker’s Dracula. Fast-moving fun for thriller readers who enjoy a bit of horror and seeing bad guys get what’s coming to them.”
— Kirkus Reviews (starred review) on HELL'S GATE

“Hell’s Gate has a little bit of something for everyone and should appeal to a wide and diverse audience. Thrilling and suspenseful, with a touch of creepy and a dash of terrifying, Hell’s Gate is a fun read with an original plot and a unique cast of characters.”
— The Real Book Spy on HELL'S GATE