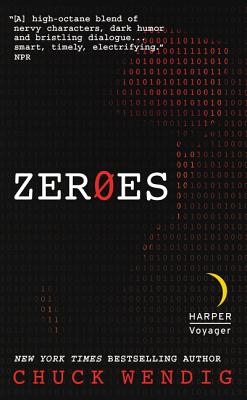 “This taut thriller will reinforce your paranoia about big government, big data, and that big, nerdy barista who just seems to know too much.” — Wall Street Journal

“With complex characters and feverishly paced action, ZEROES is a sci-fi thriller that won’t stop blowing your mind until the last page. ... It left me rooting for the hackers!” — Daniel H. Wilson, bestselling author of Robopocalypse

“A sci-fi surveillance thriller with a twisted heart of creepy horror. It grabs you by the throat on page one, and never lets go.” — Ramez Naam, author of The Nexus Trilogy

“A Matrix-y bit of old-school cyberpunk updated to meet the frightening technology of the modern age...An ambitious, bleeding-edge piece of speculative fiction that combines hacker lore, wet-wired horror, and contemporary paranoia in a propulsive adventure that’s bound to keep readers on their toes.” — Kirkus Reviews

“Wendig wields the tools of suspense and tension with skill. His large cast of characters is entertaining, the moments of horror are sharp and chilling, and the story races to a breathless conclusion.” — Publishers Weekly

“Wendig’s second novel is a splendidly profane slice of urban fantasy--hard, dark and fast. Slick one-liners and laugh-out-loud descriptions pepper the prose, macking Blackbirds a black comedy that even the Grim Reaper could smile at.” — Financial Times

“Wendig writes hard and fast and this is a slick noirish thriller.” — The Independent, on Blackbirds

“A gleefully dark, twisted road trip for everyone who thought Fight Club was too warm and fuzzy. I loved it, and will be seeking professional help as soon as Chuck lets me out of his basement.” — James Moran, Dr. Who writer, on Blackbirds

“ZEROES is a very powerful development of the idea of science as magic, with a cast of unwitting sorcerors’ apprentices. It asks a lot of real-world questions, both moral and practical.... It might make you nostalgic for Mr. Gibson’s “Neuromancer”: Life was so much simpler back in the ‘80s.” — Wall Street Journal