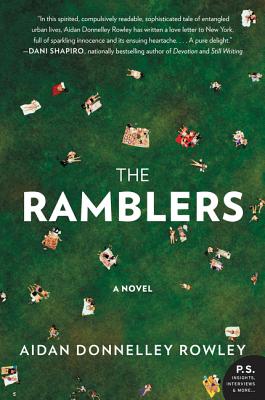 “This charming book is an homage to families - both the ones we are born with and the ones we create. It follows three characters in their early 30s who are trying to take the next steps toward growing up, deciding who they really are, and what they really want to do with the rest of their lives. They are closely linked and surrounded by family members who are in turns supportive, destructive, and ultimately loving. As members of New York's privileged, they are free to explore their options while enjoying the best the city has to offer. You will laugh, cry, and cheer these characters on as they come to terms with both their past and their future.”
— Ann Carlson (W), Waterfront Books, Georgetown, SC
View the List

For fans of J. Courtney Sullivan, Meg Wolitzer, Claire Messud, and Emma Straub, a gorgeous and absorbing novel of a trio of confused souls struggling to find themselves and the way forward in their lives, set against the spectacular backdrop of contemporary New York City.

Set in the most magical parts of Manhattan—the Upper West Side, Central Park, Greenwich Village—The Ramblers explores the lives of three lost souls, bound together by friendship and family. During the course of one fateful Thanksgiving week, a time when emotions run high and being with family can be a mixed blessing, Rowley’s sharply defined characters explore the moments when decisions are deliberately made, choices accepted, and pasts reconciled.

Clio Marsh, whose bird-watching walks through Central Park are mentioned in New York Magazine, is taking her first tentative steps towards a relationship while also looking back to the secrets of her broken childhood. Her best friend, Smith Anderson, the seemingly-perfect daughter of one of New York’s wealthiest families, organizes the lives of others as her own has fallen apart. And Tate Pennington has returned to the city, heartbroken but determined to move ahead with his artistic dreams.

Rambling through the emotional chaos of their lives, this trio learns to let go of the past, to make room for the future and the uncertainty and promise that it holds. The Ramblers is a love letter to New York City—an accomplished, sumptuous novel about fate, loss, hope, birds, friendship, love, the wonders of the natural world and the mysteries of the human spirit.


Praise For The Ramblers: A Novel…

“THE RAMBLERS is an engrossing, meticulously observed novel of New York. Aidan Donnelley Rowley explores the lives of characters navigating the challenges of friendship, jealousy, love and the need to confront their past before they can create a future.” — Will Schwalbe, author of the New York Times Bestseller THE END OF YOUR LIFE BOOK CLUB.

“In this spirited, compulsively-readable, sophisticated tale of entangled urban lives, Aidan Donnelley Rowley has written a love letter to New York, full of sparkling innocence and its ensuing heartache. THE RAMBLERS is a pure delight.” — Dani Shapiro, author of Devotion and Still Writing

Witty and engaging, The Ramblers takes us deep into the cloistered world of three New Yorkers, where privilege does not necessarily lead to happiness. Aidan Donnelley Rowley is an expert at revealing her characters with depth and care.” — Mira Jacob, author of The Sleepwalker's Guide to Dancing

“Aidan Donnelley Rowley’s finely honed prose creates a New York story that had me enchanted from the first flirtation. It’s not often that a book embeds you so deeply with the characters that you feel as if you are in the story.” — Lee Woodruff, New York Times bestselling author of Those We Love Most

“The Ramblers weaves a bewitching, wise tale of how love’s path may take unexpected twists and turns. [...] a deeply moving and elegant book about how we find ourselves and each other. It pulled me in with its first pages, and wouldn’t let go until the last.” — Sophie McManus, author of The Unfortunates

“Rowley once again captures the bright dialog, urban and romantic insecurities, and stylish lifestyle of a group of appealing upper-echelon mid-30s Manhattanites who defy the jaded stereotypes and will have readers rooting for them as they stumble their way to happiness. Irresistible.” — Library Journal (starred review)

“Sharing that stage, though, is the natural world of Central Park, and the juxtaposition of the human noise against the quiet of the park gives the author’s view of New York an appealing depth.” — Booklist

“…We’re calling it now, this one is going to be a best-seller and is a must-have for novel-lovers.” — Hello Real Life

“This gorgeous second novel by Aidan Donnelley Rowley centers on three different people in Manhattan in the week leading up to Thanksgiving weekend. [...] Sprinkled with beautiful literary references throughout, The Ramblers is a must read for bibliophiles.” — POPSUGAR.

“Over a week in New York City, a trio of friends-an heiress, a photographer, and an ornithologist (fun, right?)-support one another like family through hard times. Discuss with your gang over brunch.” — Glamour

“Think Friends with a little more drama and no laugh track. About three twenty-somethings (a socialite, a newly rick techie...and a birdwatcher!) in NYC. Perfect for the long weekend.” — The Skimm

“Three New Yorkers-a bird watcher, a type-A fixer, and an artist-try to navigate the zigzags of living and loving in the city during one crucial week.” — Cosmopolitan

“A week of soul-searching and lovemaking among Yale alumni in New York... Enjoyable.” — Kirkus Reviews

“Clio, Smith and Tate would feel completely lost in the world, if not for their enduring friendship. Rambling through New York City one fateful week, the trip learns from each other how to let go of past heartaches and open themselves to the uncertainty and promise that the future holds.” — Woman's World

“Although it’s early, we’ve already committed to Aidan Donnelley Rowley’s The Ramblers as one of our favorite books of the year…You’ll at once fall in love with both the characters and with New York City itself…” — Domino

“You’re sure to be drawn into these characters and the lessons they learn throughout the emotional chaos of their lives.” — Bustle

Born and raised in New York City, Aidan Donnelley Rowley graduated from Yale University and received her law degree from Columbia University. She is the author of a previous novel, Life After Yes, and the creator of the Happier Hours Literary Salons. She lives in Manhattan with her husband and three daughters.

1. Thanksgiving is a holiday that many people simultaneously love and dread. The author purposefully set The Ramblers during the week leading up to Thanksgiving. Why do you think she chose this particular time of year? How to you think the looming holiday might be affecting her characters?

2. Clio Marsh studies birds, creatures with the unique ability to fly away at a moment’s notice. Clio herself suffers from anxiety, which also drives her to “fly away.” How does Clio’s choice of career reflect the issues she faces in her life? And, given her subconscious quest for impermanence, is it a surprise she chooses to fall in love with a man who lives in a hotel rather than a “real home”?

4. In college, Clio often felt as if she didn’t quite fit in. Tate and, especially, Smith, seemed like the ultimate insiders. But was this truly the case?

5. Smith helps others organize and clean out the clutter in their lives, but Smith’s life is actually kind of a mess. Describe what you see as Smith’s greatest “excess baggage.” And how is her relationship with her family the cause of this mess? Or is it?

6. Smith’s father says: “We didn’t send you to Yale to become a housekeeper.” How does her father’s perpetual perceived disdain inform Smith’s current life choices? Do you think it was rebellion that propelled her relationship with Asad? Do you think Asad was ever truly as invested in Smith as she was in him?

7. In many families there is the “perfect” child—here Sally—and the “let-down,” here Smith. Do you think that this is truly the case in Smith’s family? Or is this only Smith’s point of view? Do you sense Thatcher and Bitsy may have been as hard on Sally—creating her perfection—as they were on Smith—creating her sense of imperfection?

8. Sister relationships are always complicated, and often sisters can hurt each other in ways friends do not. Here, Sally hides the truth from Smith about Asad’s impending fatherhood. Do you feel she was right to do so? In what ways, if any, does Sally act guilty for getting her sister and Asad together in the first place? And how has Smith hurt Sally, either purposefully or inadvertently?

9. Tate proposes to his soon-to-be ex-wife, Olivia, on 9/12/11, the day after “9/11.” Olivia is described as constantly seeking happiness. Was his proposal—and her acceptance— an effort on both of their parts to find happiness in an otherwise chaotic world? Do you think they would have gotten married if not for the events of that day?

10. Why haven’t Clio and her father ever truly discussed Eloise? What pushes them to finally face her memory? In what ways was Eloise magical to both of them and in what ways was she unintentionally destructive? Eloise had Bipolar Disorder, which is often misunderstood or misdiagnosed. What, if anything, could Clio or her father have done to “save” Eloise?

11. How do you think Bitsy and Thatcher ever got together to begin with? Do you think Smith knows her father broke up her romance with Asad? If so, how can a person forgive someone who acts so unforgivably?

12. Clio’s mother, Eloise, was obsessed with Charles Darwin and the concept of natural selection (among other things about him). Is it possible that this is the first time in their lives all three main characters—Clio, Smith, and Tate—have been forced from the safety of their nests? In what ways are they all like the little bird Clio and Henry encounter at the novel’s end?