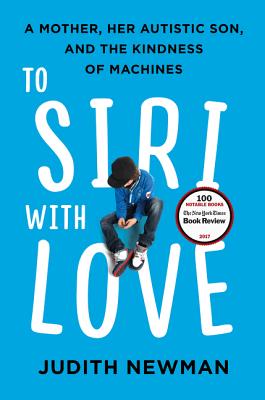 To Siri with Love

A Mother, Her Autistic Son, and the Kindness of Machines

From the author of the viral New York Times op-ed column "To Siri with Love" comes a collection of touching, hilarious, and illuminating stories about life with a thirteen-year-old boy with autism that hold insights and revelations for us all.

When Judith Newman shared the story of how Apple’s electronic personal assistant, Siri, helped Gus, her son who has autism, she received widespread media attention and an outpouring of affection from readers around the world. Basking in the afterglow of media attention, Gus told anyone who would listen, "I’m a movie star."

Judith’s story of her son and his bond with Siri was an unusual tribute to technology. While many worry that our electronic gadgets are dumbing us down, she revealed how they can give voice to others, including children with autism like Gus—a boy who has trouble looking people in the eye, hops when he’s happy, and connects with inanimate objects on an empathetic level.

To Siri with Love is a collection of funny, poignant, and uplifting stories about living with an extraordinary child who has helped a parent see and experience the world differently. From the charming (Gus weeping with sympathy over the buses that would lie unused while the bus drivers were on strike) to the painful (paying $22,000 for a behaviorist in Manhattan to teach Gus to use a urinal) to the humorous (Gus’s insistence on getting naked during all meals, whether at home or not, because he does not want to get his clothes dirty) to the profound (how an automated "assistant" helped a boy learn how to communicate with the rest of the world), the stories in To Siri with Love open our eyes to the magic and challenges of a life beyond the ordinary.


Praise For To Siri with Love: A Mother, Her Autistic Son, and the Kindness of Machines…

“Newman is a gifted personal essayist, her warmth and wit recalling Nora Ephron’s. The result is a bracingly honest chronicle of life alongside an autistic family member. For the many parents raising children with autism, the book offers both empathy and comic relief. But readers of all backgrounds will find it just as engaging…. To Siri With Love is above all a close and wise portrait, Newman’s love letter not to technology but to her son.”
— Washington Post

“An uncommonly riotous and moving book… powerfully wrought… what you’ll get with this small memoir: whipsaws of brilliant zingers and heart punches that make it distinctive among the fast-growing library of autism lit.”
— Ron Suskind, New York Times

“Writing with wit, humor, and effervescent honesty, Newman charts her history with twin sons who became distinctly different even prior to their first birthdays…. A powerful and heartfelt ‘slice of life’ tale.”
— Kirkus

“Newman shares her sometimes funny, sometimes sad, and always insightful and upbeat recollections.... A positive yet honest look into one family’s journey with autism.”
— Library Journal

“To Siri with Love is a beautifully honest and illuminating love letter to Gus, your typical atypical nonneurotypical human.”
— Jon Stewart

“A moving and witty memoir with a big heart.”
— Nigella Lawson

“This warm series of stories offers a glimpse of what it’s like to parent a child who has a touch of magic in his soul.”
— Good Housekeeping

“Judith Newman redefines maternal love ...The book is part Operating Instructions, part love letter to both her son and technology, and a totally engrossing read. Resistance is futile. Cancel your plans when you pick up this book because you’ll want to read it cover to cover.”
— Annabelle Gurwitch, writer/actor

“By turns hilarious and compassionate, To Siri with Love is one of the most moving books about modern parenthood ever written.”
— Laura Zigman, author of Animal Husbandry

“In To Siri With Love Newman shows us that anyone, absolutely anyone, could have a bright future right at the tips of their fingers.”
— Bookstr

“A collection of touching, hilarious and illuminating stories about life with a 13-year-old boy with autism, written by his mother.”
— BookReporter

“From the struggles to the triumphs, Newman truly lets readers into her family life in this intimate and moving memoir.”
— BookTrib

“Newman’s observations, recollections and personal research are invaluable, and there’s no doubt that To Siri With Love will attract a grateful readership.”
— 20 Something Reads

Judith Newman is the author of You Make Me Feel Like an Unnatural Woman. She is a regular contributor for The New York Times Style Section and People, and is a contributing editor to Allure and Prevention. She has written for Vanity Fair, Harper’s Bazaar, The Wall Street Journal, Vogue, Redbook, GQ, Marie Claire, and Cosmo. She and her sons live in Manhattan.