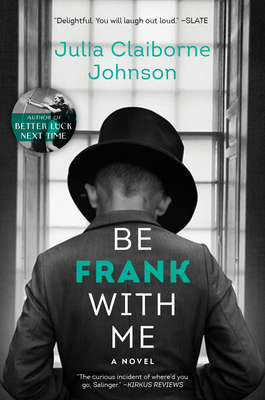 Be Frank With Me

WINNER OF THE AUDIE AWARD FOR BEST FEMALE NARRATOR

A sparkling talent makes her fiction debut with this infectious novel that combines the charming pluck of Eloise, the poignant psychological quirks of The Curious Incident of the Dog in the Night-Time and the page-turning spirit of Where’d You Go, Bernadette.

Reclusive literary legend M. M. “Mimi” Banning has been holed up in her Bel Air mansion for years. But after falling prey to a Bernie Madoff-style ponzi scheme, she’s flat broke. Now Mimi must write a new book for the first time in decades, and to ensure the timely delivery of her manuscript, her New York publisher sends an assistant to monitor her progress. The prickly Mimi reluctantly complies—with a few stipulations: No Ivy-Leaguers or English majors. Must drive, cook, tidy. Computer whiz. Good with kids. Quiet, discreet, sane.

When Alice Whitley arrives at the Banning mansion, she’s put to work right away—as a full-time companion to Frank, the writer’s eccentric nine-year-old, a boy with the wit of Noel Coward, the wardrobe of a 1930s movie star, and very little in common with his fellow fourth-graders.

As she slowly gets to know Frank, Alice becomes consumed with finding out who Frank’s father is, how his gorgeous “piano teacher and itinerant male role model” Xander fits into the Banning family equation—and whether Mimi will ever finish that book.

Full of heart and countless “only-in-Hollywood” moments, Be Frank with Me is a captivating and unconventional story of an unusual mother and son, and the intrepid young woman who finds herself irresistibly pulled into their unforgettable world.


Praise For Be Frank With Me: A Novel…

“Readers will find themselves captivated.” — People

“Delightful. You will laugh out loud.” — Slate

“Johnson’s magnificently poignant, funny, and wholly original debut goes beyond page-turner status. Readers will race to the next sentence. And the next. Her charming, flawed, quietly courageous characters, each wonderfully different, demand a second reading while we impatiently await the author’s second work.” — Library Journal (starred review)

“A lot of fun to be had along the way. Sit back…and enjoy the show.” — New York Times Book Review

“Julia Claiborne Johnson ably conjures a quirky cast and a privileged California world. BE FRANK WITH ME is about being an outsider and the ways in which differences help others see the world in a new way. Like Frank, this offbeat story has a big heart.” — BookPage

“Johnson’s spare, wry, Salingeresque style evokes those great oddball novels of the past and provides a charming take on the parent-of-challenged-child theme.” — Daily Mail (London)

“Frank Banning may be the most endearing scene-stealer you’ll ever meet in the pages of a book...Johnson proves it’s possible to write a comic novel that, at times, is heartbreaking.” — Richmond Times-Dispatch

“This book has stayed with me since I turned the last page. Frank is one of the most memorable children in contemporary fiction.” — Irish Times

“Simply delightful...A warm and friendly book, with characters you want to get to know.” — Sunday Times (London)

“Hilarious, poignant and full of unexpected gems, BE FRANK WITH ME illuminates the strange ways literature can parallel life, and introduces readers to one of the most charming, lovable and maddening children in fiction.” — Huffington Post

“Witty dialogue, irresistible characters, and a touch of mystery make this sweet debut about a quirky Hollywood family an enjoyable page-turner.” — Booklist

“The curious incident of where’d you go, Salinger.” — Kirkus Reviews

“Witty, but never cutesy. Deeply felt, but never sentimental. Peopled with deeply flawed, fully realized characters I cared about... I loved every minute I spent in Julia Claiborne Johnson’s glass house with her cast of dedicated stone-throwers. This one is special---don’t miss it.” — Joshilyn Jackson, New York Times-bestselling author of The Opposite of Everyone

“There’s so much to love about this novel: the hilarious one-liners, the unforgettable characters, the unexpected moments of tenderness and all the funny, sad, poignant twists and turns this story takes. I lost myself in these pages and you will too.” — John Searles, nationally-bestselling author of Help for the Haunted

“Julia Claiborne Johnson has written an effervescent gem of a novel, expertly balancing on a literary tightrope between lighthearted and heartbreaking. BE FRANK WITH ME is peopled by characters at once utterly unique, and entirely authentic. I may re-read this book just to spend more time with Frank.” — Laura Nicole Diamond, author of Shelter Us: a novel

Beautifully written, brimming with insight, mystery, and benevolent wit, Julia Johnson had me gripped from the first chapter to the final page of BE FRANK WITH ME.” — Julia Sweeney, author, actress, comedienne

“BE FRANK WITH ME is complex, nuanced, detailed and profound. In other words, funny, in the best, most resonant way. Read it with both eyes because it will delight both the thinky and the feely parts of your brain.” — Dave Foley, comedian and technically, an actor

“What a charmer this book is! From the very first page, I fell hard for Frank, an adorable oddball with an amazing brain, a wardrobe to die for, and a lonely fragility that pierced my heart again and again.” — Marisa de los Santos, New York Times-bestselling author of Love Walked In and The Precious One

Julia Claiborne Johnson is the author of the bestselling Be Frank with Me, a finalist for the American Bookseller’s Association Best Debut Novel Award. She grew up on a farm in Tennessee before moving to New York City, where she worked at Mademoiselle and Glamour magazines. She now lives in Los Angeles with her comedy-writer husband and their two children.

1. How does the author use physical details and dialogue to quickly establish who the character of Frank is? What were the passages that really made Frank come alive for you?

2. Can you think of a few authors who might have inspired the character of M.M. Banning? Did any of these authors write a book that was meaningful to you

3. In what ways does the author contrast the Old Hollywood that Frank loves with the new Los Angeles which he inhabits?

4. Why do you think Alice lies and says she has not read Mimi’s book? What advantage

does this give her?

5. Frank is never given an explicit diagnosis of autism, though he does have remarkable gifts and an unorthodox way of interacting socially that suggests he falls somewhere on the spectrum. Do you think the author made a conscious choice to avoid giving Frank a diagnosis of any kind? If so, why?

6. A security guard mistaking Alice for Frank’s mother says, “You need to fill the house up with more like him. You need to fill up the world.” Over the past decade the number of children with autism has risen significantly. There are theories that autism is a rapid form of evolution. Do you think this is possible? What are some of Frank’s traits that would support success in today’s society or in a future society?

7. In Chapter 14, when Alice says, “If you’d like to keep believing in the perfection of Xander Devlin…you’ll need to ignore certain events that occurred during this time,” what do you think the author is trying to show us about Xander, and about his relationships with both Alice and Mimi?

8. Do you think Mimi was right to buy t-shirts and jeans for Frank? Why or why not?

9. What do you think Xander means when he tells Alice that she’s “not curious,” but

selfish? Do you agree?

10. Why do you think Mimi is so dismissive of Alice when Alice is only trying to help her?

11. Why do you think Mimi needed to leave and go to the motel? What exactly did she need a break from?

12. Alice, Mimi, Frank, Xander and Mr. Vargas have all learned things from each other by the end of the novel. What are some of the things they’ve helped each other realize?