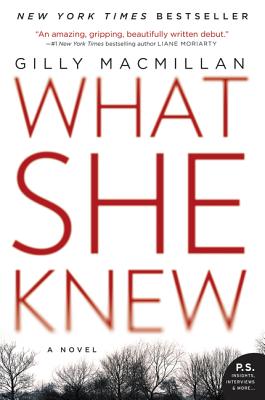 "The Changeling meets an episode of Law and Order: Special Victims Unit but set in the UK.” -The Skimm

In her enthralling debut, Gilly Macmillan explores a mother’s search for her missing son, weaving a taut psychological thriller as gripping and skillful as The Girl on the Train and The Guilty One.

In a heartbeat, everything changes…

Rachel Jenner is walking in a Bristol park with her eight-year-old son, Ben, when he asks if he can run ahead. It’s an ordinary request on an ordinary Sunday afternoon, and Rachel has no reason to worry—until Ben vanishes.

Police are called, search parties go out, and Rachel, already insecure after her recent divorce, feels herself coming undone. As hours and then days pass without a sign of Ben, everyone who knew him is called into question, from Rachel’s newly married ex-husband to her mother-of-the-year sister. Inevitably, media attention focuses on Rachel too, and the public’s attitude toward her begins to shift from sympathy to suspicion.

As she desperately pieces together the threadbare clues, Rachel realizes that nothing is quite as she imagined it to be, not even her own judgment. And the greatest dangers may lie not in the anonymous strangers of every parent’s nightmares, but behind the familiar smiles of those she trusts the most.

Where is Ben? The clock is ticking...


Praise For What She Knew: A Novel…

“Gilly Macmillan introduces some smart variations on the [missing child] theme in her debut mystery...Macmillan enlivens the narrative with emails, newspaper headlines, passages from professional journals, even transcripts from Inspector Clemo’s sessions with a psychotherapist. But her best move is to include vicious blog posts that go viral.” — New York Times Book Review

“This accomplished, intelligent debut should come with a warning--it’s completely addictive. A nail-biting, sleep-depriving, brilliant read.” — Saskia Sarginson, author of The Twins

“Every parent’s nightmare, handled with intelligence and sensitivity, the novel is also deceptively clever. I found myself racing through to find out what happened.” — Rosamund Lupton, international bestselling author of Sister

“Tightly focused and fast-paced. You won’t rest until you really know what happened.” — Lisa Ballantyne, author of The Guilty One

“Heart-in-the-mouth excitement from the start of this electrifyingly good debut…an absolute firecracker of a thriller that convinces and captivates from the word go. A must read.” — Sunday Mirror

“A mother and son spend an ordinary Sunday at a park near Londontown. Until the boy goes missing. Cue dramatic music. This read’s basically The Changeling meets an episode of Law and Order: Special Victims Unit but set in the UK.” — The Skimm

“What an amazing, gripping, beautifully written debut. WHAT SHE KNEW kept me up late into the night (and scared the life out of me).” — Liane Moriarty, New York Times bestselling author

“One of the brightest debuts I have read this year - a visceral, emotionally charged story….heart-wrenchingly well told and expertly constructed, this deserves to stay on the bestseller list until Christmas” — The Daily Mail

“Macmillan peppers her debut with subtle red herrings and a variety of potential suspects, ratcheting up the tension slowly but oh so deliciously.” — Booklist

“Readers will have a tough time putting this one down. — Publishers Weekly

“…a clever, dark, compulsive read… If you liked <em>All the Missing Girls</em> by Megan Miranda, you’ll also enjoy this one.” — Birmingham magazine

“If you like a good nail-biting, scary read...[t]his was a brilliant read!...This story is fast-paced, smart, technologically current, and every parent’s nightmare! If you enjoyed the film I did, Kidnap, you’ll love this addictive adventure.” — Halle Berry