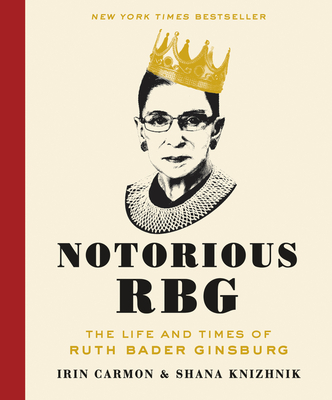 "It was beyond my wildest imagination that I would one day become the 'Notorious RBG." — Ruth Bader Ginsburg, 2019

She was a fierce dissenter with a serious collar game. A legendary, self-described “flaming feminist litigator” who made the world more equal. And an intergenerational icon affectionately known as the Notorious RBG. As the nation mourns the loss of Ruth Bader Ginsburg, discover the story of a remarkable woman and learn how to carry on her legacy.

This runaway bestseller, brought to you by the attorney founder of the Notorious RBG Tumblr and an award-winning feminist journalist, is more than just a love letter. It draws on intimate access to Ginsburg's family members, close friends, colleagues, and clerks, as well as an interview with the Justice herself. An original hybrid of reported narrative, annotated dissents, rare archival photos and documents, and illustrations, the book tells a never-before-told story of an unusual and transformative woman who transcended divides and changed the world forever.

“The authors make this unassuming, most studious woman come pulsing to life....’Notorious RBG’ may be a playful project, but it asks to be read seriously...That I responded so personally to it is a testimony to [its] storytelling and panache.” — Jennifer Senior, New York Times

Carmon and Knizhnik write powerfully about the progression of Ginsburg’s legal career. In particular, they make vivid the development of her trademark arguments ... In her fierce honesty, resolute realness, and, yes, innate sense of style (those collars!), Ginsburg emerges as a cultural icon worthy of her own fanbase — Kate Tuttle, The Boston Globe

"Brooklyn, New York, represents no fear, confidence, and speaking your truth, and my dad and Justice Ginsburg lived those words. I think he would be honored to share the 'Notorious' title with her, and it's up to us to honor their legacies by continuing to fight for equality and justice for all by voting and getting into good trouble."  — CJ Wallace, son of Notorious BIG

“What a wonderful book: The annotated dissents! The knockout photos! Why she likes to write through the night! The litany of big cases she won as a lawyer, and how she picked them! How she made Bill Clinton cry! Notorious RBG is a laugh-out-loud joy to read.” — Rachel Maddow

“A deeply original mashup of pop culture and serious scholarship. I plan to give a copy to both of my daughters.” — Gilbert King, Pulitzer Prize-winning author of Devil in the Grove

“If you admired RBG before, Carmon and Knizhnik will make you fall in love with her, not only as a feminist hero but a human being.” — Vogue

“[The Notorious RBG] book mixes cheeky fan art with a serious – and stirring – account of Ginsburg’s life and work, covering everything from her trailblazing legal career to her current exercise regimen.” — Rolling Stone

“After this treatment, surely, Biggie would agree that RBG truly is notorious.” — NPR.org

“[R]iddled with fascinating revelations about the beloved and, yes, notorious U.S. Supreme Court justice…the book eloquently and thoroughly demonstrates once and for all that RBG backs her whip smart, often snarky one-liners with a substantive feminist legacy.” — Mic

“You may never get to chat with RBG herself, but through the book, you can let her quotes inspire you and guide your way in all of life’s events.” — Bustle

“In her fierce honesty, resolute realness, and, yes, innate sense of style (those collars!), Ginsburg emerges as a cultural icon worthy of her own fanbase.” — Boston Globe