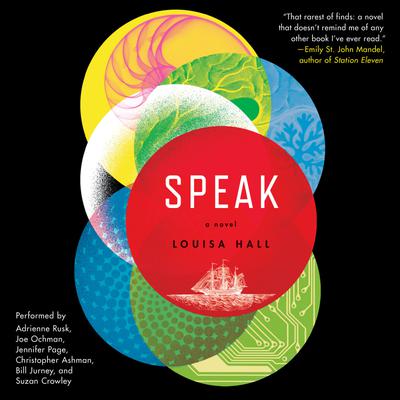 “This is an amazingly complex novel that explores humanity, time, memory, communication, love, and the fear of losing what once was. Introducing five different narratives that at first seem unconnected, Hall creates a shimmering spiderweb of a story: delicately crafted, fragile, and infinitely beautiful, uncovering humanity's most elusive and abstract thoughts. Hall impresses upon the reader the importance of speaking not just in order to move forward, but also in order to retain the past: 'They are all in me, in the words that I speak, as long as I am still speaking.”
— Nancy Solberg (E), Odyssey Bookshop, South Hadley, MA
View the List

A thoughtful, poignant novel that explores the creation of Artificial Intelligence—illuminating the very human need for communication, connection, and understanding.

In a narrative that spans geography and time, from the Atlantic Ocean in the seventeenth century, to a correctional institute in Texas in the near future, and told from the perspectives of five very different characters, Speak considers what it means to be human, and what it means to be less than fully alive.

A young Puritan woman travels to the New World with her unwanted new husband. Alan Turing, the renowned mathematician and code breaker, writes letters to his best friend’s mother. A Jewish refugee and professor of computer science struggles to reconnect with his increasingly detached wife. An isolated and traumatized young girl exchanges messages with an intelligent software program. A former Silicon Valley Wunderkind is imprisoned for creating illegal lifelike dolls.

Each of these characters is attempting to communicate across gaps—to estranged spouses, lost friends, future readers, or a computer program that may or may not understand them. In dazzling and electrifying prose, Louisa Hall explores how the chasm between computer and human—shrinking rapidly with today’s technological advances—echoes the gaps that exist between ordinary people. Though each speaks from a distinct place and moment in time, all five characters share the need to express themselves while simultaneously wondering if they will ever be heard, or understood.

Louisa Hall grew up in Philadelphia. After graduating from Harvard, she played squash professionally while finishing her premedical coursework and working in a research lab at the Albert Einstein Hospital. She holds a PhD in literature from the University of Texas at Austin, where she currently teaches literature and creative writing, and supervises a poetry workshop at the Austin State Psychiatric Hospital. She is the author of the novel The Carriage House, and her poems have been published in The New Republic, Southwest Review, Ellipsis, and other journals.