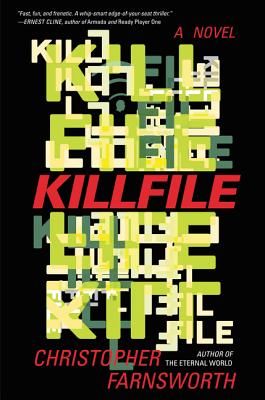 The author of The Eternal World seamlessly combines history, biotechnology, action, and adventure in this high-concept thriller in the spirit of James Rollins, Brad Thor, and Douglas Preston.

John Smith possesses a special gift that seems more like a curse: he can access other people’s thoughts. He hears the songs stuck in their heads, knows their most private traumas and fears, and relives the painful memories they can’t let go of. The CIA honed his skills until he was one of their most powerful operatives, but John fled the Agency and now works as a private consultant, trying to keep the dark potentials of his gift in check—and himself out of trouble.

Unfortunately, John is unexpectedly plunged into dangerous waters when his latest client, billionaire software genius Everett Sloan, hires him to investigate a former employee—a tech whiz kid named Eli Preston—and search his thoughts for some very valuable intellectual property Sloan is convinced he’s stolen. But before John can probe Preston’s mind, his identity is compromised and he’s on the run for his life, along with Sloane’s young associate, Kelsey Foster.

Hunted by shadowy enemies with extensive resources and unknown motives, John and Kelsey must go off the grid. And John knows that using his powers to their fullest potential is their only hope for survival—even if it means putting his own sanity at risk.

Christopher Farnsworth is a journalist and screenwriter and the author of six novels, including the President's Vampire trilogy. He lives in Los Angeles with his wife and daughters.


Praise For Killfile: A Novel…

Praise for Killfile: “Fast, fun, and frenetic. A whip-smart edge-of-your-seat thriller.”
— Ernest Cline, author of Armada and Ready Player One

“Christopher Farnsworth has written a blistering, provocative, and propulsive novel - reading KILLFILE is the equivalent of being strapped to the nosecone of a ballistic missile hurtling through the sky at 5,000 MPH. Which is to say, it’s one hell of a ride.”
— Nick Cutter, author of THE TROOP and THE DEEP

“Like his protagonist, Chris Farnsworth is a mind reader: he knows how to keep me hooked until I reach the last page. KILLFILE is his best yet.”
— Ian Tregillis, author of BITTER SEEDS and THE RISING

“From the very first page of KILLFILE, I knew I was in the hands of a master storyteller. Christopher Farnsworth delivers his best thriller yet, and I can’t wait to read whatever he comes up with next.”
— Boyd Morrison, author of THE ARK and THE EMPEROR'S REVENGE (with Clive Cussler)

“. . . Mixing a deliciously readable hybrid of “man on the run” adventure with technothriller elements and a protagonist with a powerful telepathic talent that doesn’t hesitate to kick him in the balls on occasion, Killfile is, in the final analysis, bloody good fun.”
— Jonathan Howard, author of JOHANNES CABAL THE NECROMANCER
or support indie stores by buying on
Copyright © 2020 American Booksellers Association