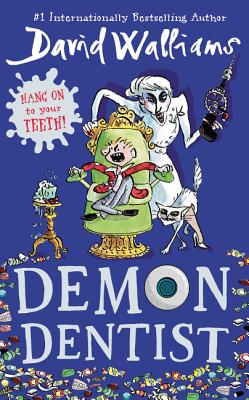 This New York Times bestseller from David Walliams, the UK’s #1 bestselling children’s author and “the heir to Roald Dahl” (The Spectator), launched his books stateside in a big way!

Walliams makes going to the dentist a wacky adventure with his signature humor—this is one dentist appointment you don’t want to miss.

Something strange is happening in Alfie's town. Instead of shiny coins from the Tooth Fairy, kids are waking up to dead slugs, live spiders, and other dreadfully icky things under their pillows.

Who would do something so horrific? Alfie is sure that Miss Root, the creepy new dentist in town, is behind it all. There's nothing Alfie hates more than going to the dentist, but to solve this mystery, he may have to book a dreaded appointment….

PRAISE IN THE USA FOR DEMON DENTIST:
“A Brit-flavored romp that combines moments of intense terror and bracing courage with biting satire.”
— Kirkus Reviews

“A Dahl-esque mix of humor and horror that will appeal to fans of both.”
— Bulletin of the Center for Children’s Books

“A goofy, gory, outlandish tale of deep evil and terrible tooth-rot—and sweetness of heart. Kids who enjoy humorous gross-out horror will definitely want to book an appointment of their own with the Demon Dentist.”
— Wall Street Journal

“Dahl-esque in the extreme…Frenetic humor for middle grade fans of the funny and fearsome.”
— School Library Journal

UK PRAISE FOR DAVID WALLIAMS:
“No one has any business being as talented as David Walliams. He is the heir to Roald Dahl—and that’s saying a lot.”
— The Spectator

“Comedian David Walliams has taken the publishing world by storm.”
— The Metro

“A triumphant mix of wit and warmth.”
— Telegraph

“A great comic tale—Walliams is a natural wit.”
— Evening Standard

David Walliams is the New York Times bestselling author of Demon Dentist, The Midnight Gang, and Grandpa's Great Escape. His novels have sold over eighteen million copies worldwide and have been translated into over fifty-three languages. David’s books have achieved unprecedented critical acclaim—with many reviewers comparing him to his all-time hero, Roald Dahl. In addition to being a bestselling author, David is an actor, comedian, and television personality. In 2017, he was awarded an OBE for services to charity and the arts. He lives in the UK.