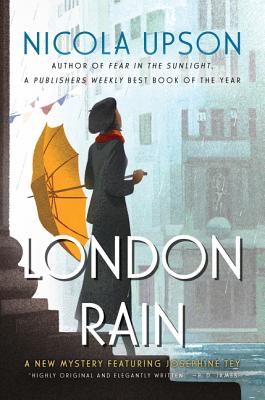 London, 1937. Following the gloomy days of the abdication of King Edward VIII, the entire city is elated to welcome King George. Just one of the many planned festivities for the historic coronation is a BBC radio adaptation of Queen of Scots, and the original playwright, Josephine Tey, has been invited to sit in on rehearsals.

Soon, however, Josephine gets wrapped up in another sort of drama. The lead actress has been sleeping with Britain’s most venerable newsman, Anthony Beresford—and his humiliated wife happens to work in the building. The sordid affair seems to reach its bloody climax when Beresford is shot to death in his broadcasting booth at the deafening height of the coronation ceremony.

Josephine’s friend Detective Chief Inspector Archie Penrose thinks he has the case wrapped up. But after two more murders, it falls to Josephine to unravel a web of betrayal, jealousy, and long-held secrets, as she herself is caught in a love triangle of her own.

Charming and provocative, thick with the atmosphere of prewar England, London Rain is a captivating portrait of a city on the edge—and an unforgettable woman always one step ahead of her time.

Nicola Upson is the author of five previous Josephine Tey mysteries, including An Expert in Murder, and two works of nonfiction. She has worked in theater and as a freelance journalist. A recipient of an Escalator Award from the Arts Council England, she splits her time between Cambridge  and  Cornwall.

“A complex and compelling plot with rich historical detail…. A brilliant meditation on love’s depths and darknesses, London Rain stands out on every level…complete with a stunning conclusion.”
— Richmond Times-Dispatch

“The author continues to blend history and fiction seamlessly…. A murder mystery that will keep readers guessing. The glimpses into the changing face of feminism and the politics of the BBC in the late 1930s prove equally intriguing.”
— RT Book Reviews

“This book is what historical crime is all about.”
— Suspense Magazine

“Revenge, murder, and royal pageantry…. The complexity of the overlapping relationships and a burst of momentum make [this] fictionalized heroine’s sixth case a worthy sequel to its predecessors.”
— Kirkus Reviews

“Old secrets come to light involving murder…in the sixth entry in this series, notable for its well-wrought characters and involving plots that vividly capture a time and place.”
— Booklist

“Upson…possesses great skills in creating character-driven novels that evoke a strong sense of place, spins this sad but seductive story with grace and intelligence.”
— Richmond Times-Dispatch

“Upson’s fifth Tey mystery is a hauntingly atmospheric story based on fact with personal reverberations for Josephine herself. A worthy addition to this intriguing series starring a real-life mystery writer and set in between-the-wars England.”
— Booklist

“A deft and agreeably darker addition to the series.”
— Booklist

“Excellent. . . . Upson upsets readers’ expectations with a surprise that keeps the suspense high to the satisfying conclusion. Puzzle fans as well as admirers of psychologically rich crime authors such as Ruth Rendell will find a lot to savor.”
— Publishers Weekly (starred review)

“Lovely. . . . For fans of the British puzzle mystery, there’s a murder in a locked room, a secret passageway, a surfeit of clues, red herrings, and hidden identities.”
— Boston Globe

“Nicola Upson has . . . given us a highly original and elegantly written novel.”
— P.D. James

“Upson’s novel has beautifully rendered the modernist atmosphere of Britain between the wars. Her characters are developed richly…and her plot is a lovely layered puzzle.”
— Milwaukee Journal Sentinel
or support indie stores by buying on
Copyright © 2020 American Booksellers Association