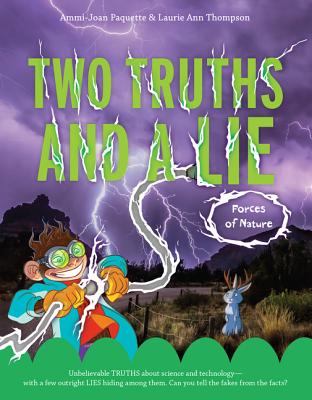 Crazy-but-true stories about the natural world make this acclaimed nonfiction series perfect for fans of curiosities and wonders—and anyone looking to explore ways to separate fact from fiction. This nonfiction chapter book is an excellent choice to share during homeschooling, in particular for children ages 7 to 9 who are reading independently. It’

Did you know that too many fidget spinners spinning in the same direction could have an adverse effect on Earth’s gravitational field? Or that the remains of a deceased loved one can be turned into a diamond? Or that the loudest known sound in history was made by a volcanic eruption in 1883, with the echoing blast circling the planet more than three times?

Welcome to Two Truths and a Lie: Forces of Nature! You’ve heard of the game: Every story in this book is strange and astounding, but one out of every three is an outright lie. Picking out the fakes isn’t as easy as you think, however. Some false stories are based on truth, and some of the true stories are just plain unbelievable! Don’t be fooled by the photos that accompany each story—it’s going to take all your smarts and some clever research to ferret out the truth.

From a man who gave himself an appendectomy to radio signals from other planets to eagles that have been trained to take out spy drones, the stories in this third installment in the Two Truths and a Lie series will amaze you! Just don’t believe everything you read. . . .