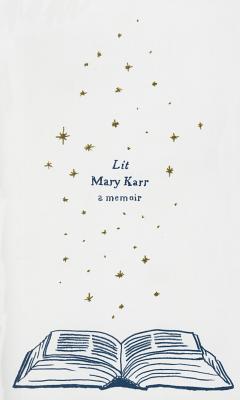 “Mary Karr sparked a memoir revival with The Liars’ Club—now she’s back with Lit to describe how she turned those early troubles into literary gold.”
— Body + Soul

“An absolute gem that secures Karr’s place as one of the best memoirists of her generation. . . . [She] writes with a singular combination of poetic grace and Texan verve.”
— Kirkus Reviews, starred review

“Her tale is riveting, her style clear-eyed and frank. That Karr survived the emotional and physical journey she regales her readers with to become the evenhanded, self-disciplined writer she is today is arguably nothing short of a miracle, and readers of her previous two books won’t be disappointed.”
— Library Journal

“Searing. . . . A book that lassos you, hogties your emotions and won’t let you go. . . . Chronicles with searching intelligence, humor and grace the author’s slow, sometimes exhilarating, sometimes painful discovery of her vocation and her voice as a poet and writer.”
— Michiko Kakutani, New York Times

“Karr could tell you what’s on her grocery list, and its humor would make you bust a gut, its unexpected insights would make you think and her pitch-perfect command of our American vernacular might even take your breath away…. [Karr] holds the position of grande dame memoirista.”
— Samantha Dunn, Los Angeles Times

“In a gravelly, ground-glass-under-your-heel voice that can take you from laughter to awe in a few sentences, Karr has written the best book about being a woman in America I have read in years.”
— Susan Cheever, New York Times Book Review

“As irresistible as it is unflinchingly honest. . . . With grace, saltiness and profanity galore, Karr undeniably re-establishes herself as one of our finest memoirists and storytellers.”
— Melanie Gideon, San Francisco Chronicle

“Dazzling. . . . Lit reminds us not only how compelling personal stories can be, but how, in the hands of a master, they can transmute into the highest art.”
— Rebecca Steinitz, Boston Globe

“Karr movingly depicts her halting journey into AA, making it clear her grit and spirit remain intact.”
— Michelle Green, People, 3 ½ out of 4 stars

“Lit matches its predecessors in candor and outstrips them in insight.”
— Commonweal

“Karr’s sharp and funny sensibility won me over to her previous two volumes, but what wins me over to Lit is the way her acute self-awareness conquers any hint that hers is the only version of this story…. Karr is as funny as ever.”
— Valery Sayers, Washington Post

“With this third book Karr has managed to raise the bar higher still on the genre of memoir.”
— Steve Ross, Huffington Post

“[Karr] continues to delight with her signature dark humor and pitch-perfect metaphors delivering large doses of wit and painful insights. . . . There are plenty of memoirs about being drunk, but this one has Karr’s voice-both sure-footed and breezy-behind it.”
— Beth Greenfield, Time Out New York

“Mary Karr has never lacked for material. But she’s always delivered on the craft side, too, with her poet’s gift for show-and-tell.”
— Elizabeth Foy Larsen, Minneapolis Star Tribune