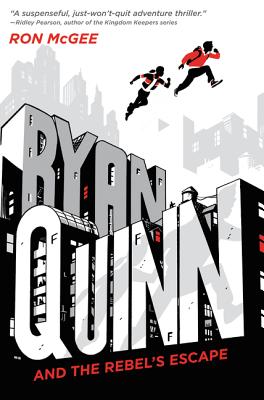 Ryan Quinn and the Rebel's Escape

Ryan Quinn and the Rebel’s Escape is the first fast-paced, sensational novel in a trilogy about a New York City teenager who could give James Bond and Jason Bourne a run for their money. Fans of Alex Rider and the Spy School series will be completely enthralled.

Ryan Quinn hopes his traveling days are over. The son of a United Nations worker, he’s grown up in Europe, the Middle East, Asia, Africa—everywhere but home. He’s finally settled at a great school in New York and is making friends when, suddenly, his world is turned upside down.

Ryan is blindsided when his father disappears and his mother is abducted. Left with nothing but questions, he soon discovers his parents have been leading a double life. They actually work with the Emergency Rescue Committee, an underground organization that has performed dangerous rescue missions since World War II, and they’ve been secretly training Ryan to follow in their footsteps.

With his parents’ lives in the balance and more at stake than he knows, Ryan dives into a mission of international intrigue that sends him around the globe. To survive, he must trust his training and perform his own daring rescue mission in a thrilling race for freedom.


Praise For Ryan Quinn and the Rebel's Escape…

“With a fast pace, familiar characters, plenty of action, and little testing of the envelope, this trilogy opener is calculated to please genre fans.” — Kirkus Reviews

“McGee’s debut novel offers readers a plot-driven and action-packed whirlwind tour around the world. Ideal for fans of Alex Rider and libraries with a large action fanbase.” — School Library Journal

“Screenwriter McGee makes a strong debut with this engaging blend of adventure, humor, and espionage. It’s a fun, adrenaline-fueled story that lays the groundwork for a franchise with potential. ” — Publishers Weekly

“ . . . it’s a solid volume for readers looking for a fast-paced, nonstop adventure of derring-do.” — Booklist

s a winner of the 2013 Children’s Long Form or Special Television Writers Guild of America Award for his work on Disney Channel’s Halloween hit Girl vs. Monster. A writer and producer of TV series, he has written for the crime drama Rizzoli & Isles and the action-adventure The Nine Lives of Chloe King. Ron has penned numerous movies for television, covering everything from the story of the boy band the Monkees to epic disasters to behind-the-scenes dramas of sitcom favorites Saved by the Bell and Full House. His debut novel was Ryan Quinn and the Rebel’s Escape. Ron lives with his family in California. You can find out more about what he’s up to at www.ronmcgee.com.
Loading...
or support indie stores by buying on
(This book is on backorder)