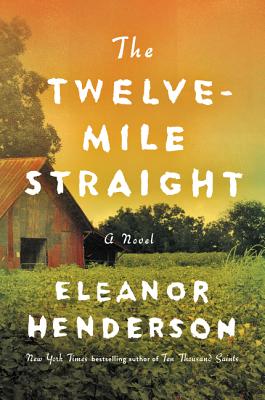 *NAMED A BEST BOOK OF 2017 BY THE SAN FRANCISCO CHRONICLE*

Cotton County, Georgia, 1930: in a house full of secrets, two babies-one light-skinned, the other dark-are born to Elma Jesup, a white sharecropper’s daughter. Accused of her rape, field hand Genus Jackson is lynched and dragged behind a truck down the Twelve-Mile Straight, the road to the nearby town. In the aftermath, the farm’s inhabitants are forced to contend with their complicity in a series of events that left a man dead and a family irrevocably fractured.


Praise For The Twelve-Mile Straight: A Novel…

“An absorbing epic of poor Georgia farm people and other folks they encounter in dicey, hardscrabble times. The elegant yet swift and crafty storytelling is spiked with so many surprises.”
— Atlanta Journal-Constitution

“This is one of the most beautiful books, as an object, I’ve ever held. What’s inside is even more beautiful: beautifully told, beautifully written, a story that penetrates to the American heart, and all the light and darkness therein.”
— Philadelphia Inquirer

“[A] superb novel whose roots can be traced to Harper Lee and Carson McCullers.”
— O, the Oprah Magazine

“Affecting, profound...offers readers a rich, comprehensive portrait of the powerful forces at work in the Jim Crow South... Henderson does an incredible job.”
— Nylon Magazine

“This engaging, expansive novel manages to feel historical and, sadly, up to the minute as it probes the sins at the heart of the American experience...This is the kind of novel you sink into, live inside. When you’re finished, it will live inside you. A bravura performance.”
— Victor Lavalle, author of The Changeling

“Lyrical...mesmerizing, disturbing, and wonderfully persuasive. The world is brutal even as the landscape is lush and seductive...Unstinting in showing us the everyday savagery of Jim Crow, of poverty, and of family abuse. A riveting, consequential story full of complex secrets and unexpected turns.”
— Dana Spiotta, author of Innocents and Others

“One of the deepest and most nuanced explorations of our shared humanity that I’ve read...The writing is so extraordinary it will make your teeth ache; the story is so compelling that you may gasp out loud...This is no ordinary novel. It is art of the highest order.”
— Cristina Henríquez, author of The Book of Unknown Americans

“A family drama, a mystery, a Southern Gothic, and a searing study of the complexities of race in America...Cotton County is a dark place, tortured by its own secrets, and it’s in Henderson’s expert hand and penetrating eye that those secrets are carried into light.”
— Bill Cheng, author of Southern Cross the Dog

“An intricate and fascinating tale of maternity and paternity, of race and blood, of two young women doing what they must do to survive...This is brave material, confronted with unblinking honesty and woven with intelligence and grace.”
— Christopher Tilghman, author of The Right-Hand Shore

“Totally immersing, provocative...The world of Twelve Mile Straight—the rural back road of this engrossing novel’s title, with its illegal distillery, chain gangs, and lynchings—will continue to haunt readers long after they finish the final page.”
— Booklist

“Doesn’t exclude the true horrors women and people of color faced in 1930s Georgia, these tragedies depicted through a fictional town with fictional characters, facing the same stakes and complicated pasts as the real town with real people. The work is raw, aching and concerning...dauntless...timeless.”
— The Ithaca Times