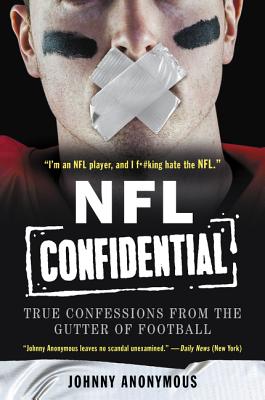 True Confessions from the Gutter of Football

A current pro player takes fans on a pseudonymous trip through one of the most infamous years of football—the very long, sometimes funny, often controversial 2013-2014 season—sharing raucous, behind-the-scenes, on-the-field, and in-the-locker-room truth about life in the National Football League.

“Well, to hell with being safe. I’m going to be honest.”

Johnny Anonymous' life goal was to be nothing greater or less than the Best NFL Back-Up of All Time™. For two years, he was content earning hundreds of thousands of dollars to stand on the sidelines doing absolutely nothing. But early in his third year, a starting lineman is injured, and he suddenly finds himself on the field.

For most players, this moment is a dream come true. But not so for our author, one of the incredibly rare birds in football who reach the highest echelons, but who actually hate America’s favorite game. That’s right. Johnny Anonymous hates football. He hates what it does to his body, his brain, his life. Luckily, he can see the humor in his own situation, but also in the machinations of the NFL.

Part truth-telling narrative, part whip-smart commentary that only a true insider could bring, part hilarious, NFL Confidential gives football fans a look at a world most would give anything to see, and gives non-fans a wild ride through the strange, and sometimes disturbing customs and realities of football today. Here is a truly unaffiliated look at the nation’s biggest, most lucrative pastime over the course of one of its most transformative seasons.

From hard-to-stomach diets, showdowns in the weight room, shenanigans in the locker room, the looming dread of being cut from the team, the racial issues that still exist in modern-day football, the rock-star lifestyle that players find themselves able to afford and sometimes enjoy a little too much, the notion of being lauded in a league plagued by controversy and the sharp contrast between the love/hate of the game and the reality of the job, Johnny reveals a never-before-seen side of the NFL.

Johnny Anonymous is a four-year offensive lineman for the NFL. Before that, he played for a major college program and in his senior year was named one of the top linemen in the nation. In his spare time, he’s earned a master’s degree in sarcasm from Getting Fucked University. During the off-season, he moonlights as a professional asshole. Under another pseudonym, he’s also a contributor for the comedy powerhouse Funny Or Die.


Praise For NFL Confidential: True Confessions from the Gutter of Football…