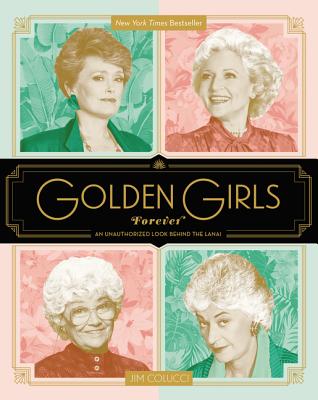 An Unauthorized Look Behind the Lanai

They were four women of a certain age, living together under one roof in Miami—smart and strong Dorothy, airhead Rose, man-hungry belle Blanche, and smart-mouthed matriarch Sophia. They were the Golden Girls, and for seven seasons, this hilarious quartet enchanted millions of viewers with their witty banter, verve, sass, and love, and reaffirmed the power of friendship and family.

Over thirty years after it first aired, The Golden Girls has become a cult classic, thanks to fan fiction, arts and crafts, podcasts, hundreds of fan blogs and websites, and syndication. Now, Golden Girls Forever pays homage to this wildly popular, acclaimed, and award-winning sitcom. Drawing on interviews with the show’s creators, actors, guest stars, producers, writers, and crew members, Jim Colucci paints a comprehensive portrait of the Girls both in front of the cameras and behind the scenes.

Illustrated with hundreds of photos, including stills from the show and a treasure trove of never-before-seen and newly rediscovered photos, Golden Girls Forever includes:

• Girls and Their Guests: short profiles of the show’s most famous guest stars

• Why I Love the Girls: Lance Bass, Laverne Cox, Ross Mathews, Perez Hilton, Zachary Quinto, Chris Colfer, Jason Collins, and many, many other celebrities share their love of the Girls

• Exclusive interviews with ninety-four-year-old Betty White; the famously private Bea Arthur and Rue McClanahan, before their deaths; and fan-favorite actors who appeared on the show

Bursting with fun facts, anecdotes, reminiscences, and insights, Golden Girls Forever is the ultimate companion to the show for fans old and new.


Praise For Golden Girls Forever: An Unauthorized Look Behind the Lanai…

“I can’t think of a better person to tell the story of the Golden Girls. Jim Colucci is not just a fan --he truly loves these ladies and everything they contributed to his other love, television. Jim, Thank You For Being a Friend, and for writing this book.”
— Melissa Peterman

“The Golden Girls was a show that shouldn’t have worked (four women over fifty living together? In the age of Baywatch?!) but ended up the closest thing to a perfect sitcom in TV history. And Golden Girls Forever takes an affectionate look at why it’s so beloved...”
— Wendi McLendon-Covey

“For as long as I can remember, I have ended my day by watching The Golden Girls. Thanks to Colucci’s Golden Girls Forever, I now have the perfect companion for my nightly binge. Jim’s knowledge of and love for the show is the gift that keeps on giving.”
— Yvette Nicole Brown

“Jim Colucci has given the die-hard Golden Girls fan an absolute, in-depth look into one of the most iconic shows on television. I, for one, can’t wait to start my new book club and have this be our first read. And of course, we’ll be serving cheesecake!”
— Lesley Boone

“It’s wonderful to see Blanche, Rose, Sophia and Dorothy honored by a true pal and confidant like Jim Colucci. Those four amazing women deserve this book, and so do you!”
— Rachael Harris

Jim Colucci is a freelance entertainment writer whose work has appeared in such publications as TV Guide, Inside TV, Quick and Simple, The Advocate, Next, and CBS’s Watch! magazine, where he serves as a deputy editor. For over a decade, Jim delivered a weekly on-air report, Must Hear TV, as a correspondent for The Frank DeCaro Show on Sirius XM. His previous books include the authorized companion book Will & Grace: Fabulously Uncensored. Originally from Wayne, New Jersey, Jim now lives in Los Angeles with his husband, Frank DeCaro, and their mischievous Boston terrier, Gabby.
Loading...
or
Not Currently Available for Direct Purchase