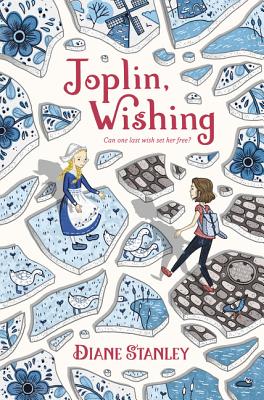 A heartfelt and magical middle grade novel in the tradition of Tuck Everlasting and Bridge to Terabithia, about family, wishes, and the power of true friends to work magic.

While cleaning out her reclusive grandfather’s house, Joplin discovers pieces of a broken platter in a cookie tin. After having the platter repaired, Joplin wishes that she could both find a friend at school, and befriend the girl pictured in the platter.

The next day, Joplin befriends a boy named Barrett, and also notices a girl outside her apartment. A girl who looks remarkably like the girl in the platter…

The girl introduces herself as Sofie, and she has a terrible secret. Cursed to grant wishes for the owner of the platter for all of time, she has been trapped for centuries. Joplin and Barrett vow to help her, but freeing Sofie is more complicated than they could have imagined, and the three friends end up against a sinister foe who could put them all in terrible danger.

“With magic and a bit of danger, and touching on themes of family, loss, friendship, misunderstandings, kindness, and second chances, Joplin and Sofie’s story is not soon forgotten.”
— Kirkus Reviews (starred review)

Joplin is a beautifully drawn character: capable, complex, prickly, and very aware of those around her, even while being bullied at school... Written with intelligence, verve, and polish, this unusual fantasy takes readers on a journey they won’t want to miss.
— Booklist (starred review)

“Stanley (The Chosen Prince) deftly infuses magic and mystery into this uplifting story about friendship and second chances... Stanley’s clever premise will quickly capture the imaginations of young readers, but it’s Joplin, with her headstrong determination; Sofie, with her soft-spoken resolve; and Barrett, with his enthusiasm and logic, who make this story special, exemplifying true friendship and sacrifice.”
— Publishers Weekly (starred review)

“Stanley’s deftly created friendships, both intergenerational and among Joplin’s peers, winningly factor into the story’s resolution. Suspenseful, mysterious, thoughtful, and occasionally melancholic, this is an intricately plotted tale that ultimately connects Sofie to Joplin (and to her mother and grandfather) in a surprising and satisfying way.”
— The Horn Book