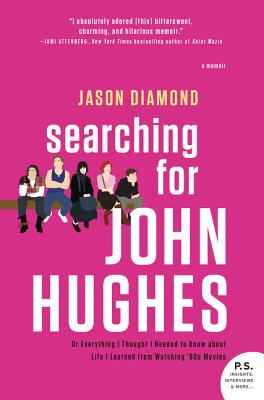 For all fans of John Hughes and his hit films such as National Lampoon’s Vacation, Sixteen Candles, and Home Alone, comes Jason Diamond’s hilarious memoir of growing up obsessed with the iconic filmmaker’s movies—a preoccupation that eventually convinces Diamond he should write Hughes’ biography and travel to New York City on a quest that is as funny as it is hopeless.

For as long as Jason Diamond can remember, he’s been infatuated with John Hughes’ movies. From the outrageous, raunchy antics in National Lampoon’s Vacation to the teenage angst in The Breakfast Club and Pretty in Pink to the insanely clever and unforgettable Home Alone, Jason could not get enough of Hughes’ films. And so the seed was planted in his mind that it should fall to him to write a biography of his favorite filmmaker. It didn’t matter to Jason that he had no qualifications, training, background, platform, or direction. Thus went the years-long, delusional, earnest, and assiduous quest to reach his goal. But no book came out of these years, and no book will. What he did get was a story that fills the pages of this unconventional, hilarious memoir.

In Searching for John Hughes, Jason tells how a Jewish kid from a broken home in a Chicago suburb—sometimes homeless, always restless—found comfort and connection in the likewise broken lives in the suburban Chicago of John Hughes’ oeuvre. He moved to New York to become a writer. He started to write a book he had no business writing. In the meantime, he brewed coffee and guarded cupcake cafes. All the while, he watched John Hughes movies religiously.

Though his original biography of Hughes has long since been abandoned, Jason has discovered he is a writer through and through. And the adversity of going for broke has now been transformed into wisdom. Or, at least, a really, really good story.

In other words, this is a memoir of growing up. One part big dream, one part big failure, one part John Hughes movies, one part Chicago, and one part New York. It’s a story of what comes after the “Go for it!” part of the command to young creatives to pursue their dreams—no matter how absurd they might seem at first.

Praise For Searching for John Hughes: Or Everything I Thought I Needed to Know about Life I Learned from Watching '80s Movies…

“Tells a heartbreaking story of restless youth, imposter syndrome, and the movies that help him make sense of it all...Makes me wnat to tell my parents and children how much I love them...and then curl up on the couch and watch The Breakfast Club.” — Emma Straub, author of the New York Times bestsellers Modern Lovers and The Vacationers

“With geniality, humor and charm, Diamond explores the ways in which cinematic fantasy can influence, overshadow, and help us to escape reality. This book is for anyone playing out an eternal adolescence.” — Melissa Broder, author of So Sad Today

“Jason Diamond writes with equal parts wit and candor about what happens when life diverges wildly from the suburban fairytales made popular by John Hughes. Diamond passionately conveys how lovely it is when we find less cinematic but harder earned happy endings on our own terms.” — Maris Kreizman, author of Slaughterhouse 90210

“Oh look, it’s all my favorite things in one book: Chicago, New York City, punk rock, food, and existential crises...Bittersweet, charming and hilarious...details the longing and struggle of an aspiring writer with clarity, wit, and heart.” — Jami Attenberg, New York Times bestselilng author of The Middlesteins and Saint Mazie

“Both funny and heartbreaking, Diamond’s memoir is not just an account of how one director’s films impacted-and perhaps saved-his life. It is also a memorable reflection on what it means to let go of the past and grow up. A quirkily intelligent memoir of finding oneself in movies.” — Kirkus Reviews

Jason Diamond is the sports editor at Rollingstone.com and founder of Vol. 1 Brooklyn. His work has been published by The New York Times, BuzzFeed, Vulture, The New Republic, The Paris Review, Pitchfork, Esquire, Vice and many other outlets. He was born in Skokie, Illinois, but currently lives in Brooklyn with his wife, his two cats and his dog named Max.